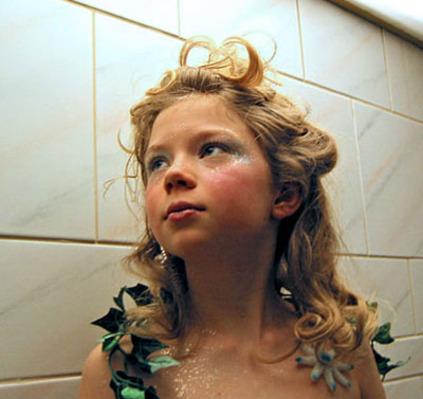 . The trickster is an important archetype in the history of man who rebels against authority pokes fun at the serious. He exists to question &amp not accept things blindly. We seem most accessible to the gifts of the Trickster when we ourselves are at or near boundaries or are experiencing transition. As an archetype the Trickster the boundary dweller finds expression through human imagination and experience…

The protagonists are young women at the age of 8-16 who are in transition and need to their individual definition of the world and themselves their own space and existence. They seem to live in another reality beyond that of parents and teachers. Many of these girls have idols figures onto which they project their fantasies. With the help of a makeup artist they will be transformed into their dream figure to be photographed with a stereo camera. The photographs will be printed life seize and will be seen with stereo glasses.

Me and my collegue at the Art Academy Andrea Sünder-Plassman collaborate on a series of three works for Vestlandsutstillingen 2005 opening today. This is a group exhibition touring several galleries in western Norway for a year.

Unfortunately the recording I was going to use as the basis for the sound got lost in the post and the takes from germany had to be done again. This has delayed development of the sound severely and the sound won’t be present until the second exhibition in a months time.