Coming Sunday the exhibition “The Idea of North” an exhibition of sound opens at Galleri F15 in Moss. Me and Jana Winderen is collaborating on an installation for it. For the installation we’ve decided to use 5 loudspeakers in one of the room all positioned near the floor and pointing upwards. The loudspeaker setup is kind of unconvetional: 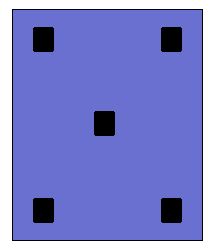 The installation will be using the same floor sensor matte system that was used for Kunsten å gå på vannet but being an installation in a gallery for a different audience (“Vannet” was intended at school kids) and with all new material and ways of dealing with it we consider this a different work.

One of the questions this has raised is how to do the spatialisation. I first wanted to try ambisonics using the same MaxMSP ambipan~ external (btw this URL seems to have died lately) that I used for the Elektropoesia installation in malmölast fall. While investigating it it turned out that with a loudspeaker setup with one loudspeaker at the very center (Cartesian coordinates (0 0)) the center loudspeaker gain was always 0.000 Not very encouraging so I posed a question to the Sursound mailing list.

Ambisoncs is a technicque for synthesizing plane waveforms arriving from outside a spherical (or circular) array of loudspeakers the standard equations go crazy for reproduction loudspeakers well inside the
reproduction space. You need something different.

Instead he recommended that I could try VBAP. I’ve used VBAP a lot before but I doubt that I could use it this time. VBAP assumes loudspeakers to be encircling you. With the loudspeaker setup at hand I would have to subdivide the gallery space into four subregions use VBAP for each of them and find a way of bridging from one region to the next as sound move. I’ve tried that before for the Living room project and abandoned it back than. The results were not convincing at all. The shifts from one region to the next were always clearly noticeable and the spatialisation felt artificial. VBAP is not really dealing with sound sorce position but rather from what direction it is arriving.

Instead I’m going to try a technique proposed at the MaxMSP list a while ago by Michael Zbyszynski. This approach treats each loudspeaker as if it’s a reflective surface for a virtual sound source. The amplitude for the reflected sound is inverse proportional to the distance from the source thus decaying 6 dB for each doubling of distance. In addition the reflection is delayed by a time interval equal to the time the sound would take to travel from the source to the surface (I’m using speed of sound equal to 340 m/s). I’m also incorporating the air~ filter from Spat describing how various frequencies are filtered when moving through air. We want to create a fairly dry acoustic soundscape so I will not be emulating room reverb.

I’ve not been able to test it myself yet. I’ve been working from home for the last days due to a flue but Jana tested it yesterday and felt that it worked well. The air~ filter is CPU intensive more than a regular biquad~ filter. Currently I’m using separate air~ filters for each source and each loudspeaker. I’m considering using only one air~ filter for each source to save some CPU cycles. The room isn’t that big and I doubt that the filtering of sound travelling through air for 7 m more or less makes that much of a difference.

In the meantime more useful hints and information pops up at the Sursound list. One suggestion is to treat the center loudspeaker as if it’s elevated compared to the rest. That would make the equations work again (though the proplem with sound souces positioned inside the sphere will probably still remain).

Jasch has offered me a pre-release of 2nd order ambisonic externals that he’s currently developing at The Institute for Computer Music and Sound Technology (ICST) at the Zurich School of Music Drama and Dance (Hochschule Musik und Theater HMT) in Zurich Switzerland. If these externals will be released under a GNU LGPL license the same way as he’ve done in the past they will be very interesting to include in Jamoma.