After a hectic week of work the installation CUBIC SECOND opened at Hordaland kunstsenter last Friday. The opening ended up being a really nice party with lots of visitors and friends present. Below are some photos from the opening taken by Jeremy Welsh. 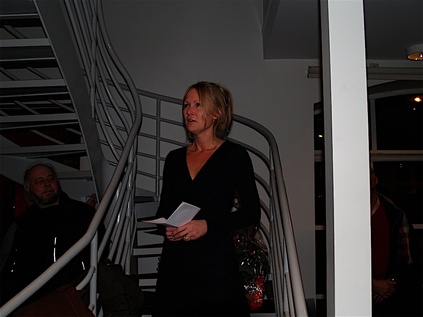 Opening speech by Mari Aare director at Hordaland kunstsenter. I am grateful to her and HKS for letting me do the installation at the gallery space one of very few spaces for contemporary art in Bergen. In addition I was able to use the space for several weeks last spring for development and testing. Most of the ideas for what to do in the space matured during that period. In addition I was able to do extensive testing of loudspeaker setup leading to the development of several modules in Jamoma for spatialisation using ambisonics and vector-based amplitude panning.

Morten Eide Pedersen senior lecturer at the Grieg Academy in composition and one of my supervisors for the fellowship can be seen behind Mari. 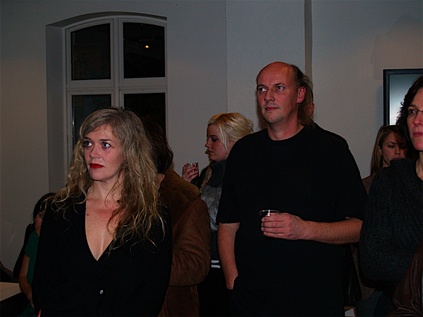 Me and the dean at the Art Academy Paula Crabtree listening to the speeches. 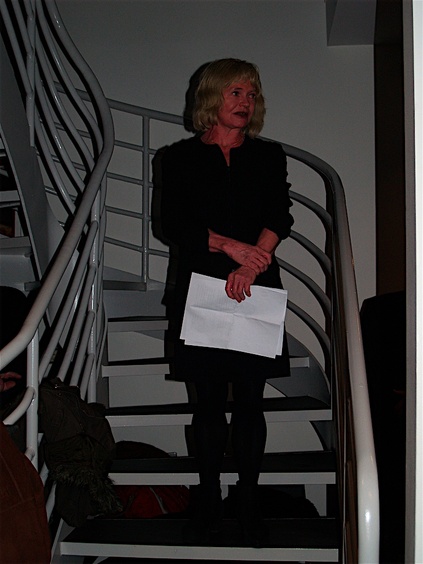 Another speech by Nina Malterud principal at Bergen National Academy of the Arts. Nina is also at the board of the fellowship program. I have had a lot of interesting discussions with her over the last three years. She is one of many at KHIB that has shown great interest and enthusiasm for what I have been working at.

I wanted to say a few words of thanks myself on the opening. I did not get the time to sit down and make a proper list beforehand so I probably forgot a whole bunch of all the persons I have been in touch with interchanging with getting help from collaborating with etc. over the last three years.

A year ago Hilde Hauan professor in textile at the department of applied arts invited me to participate in a worshop on acoustics and textiles. I probably ended up learning more than any of the students. During that workshop I also told about some of my experiences with working with the gallery space at Verftet Visningsgrommet USF last fall for the “White-out” installation. That ended up being a particularly difficult room to work in and since I have felt the need of doing an installation were I am taking total command of the space I am working in as a contrast to the experience of almost being overrun by the gallery space at Verftet. I suppose that is what I am doing for CUBIC SECOND.

In the wake of the workshop last year me and Hilde have continued discussion possible ways of modifying gallery spaces and her experience and advice was crucial to the development of this project. Hilde also joined in two days helping out with practical matters during the process of setting up this installation.

Here she is chatting with HC Gilje. He just joined the fellowship program and I have borrowed a lot of equipment from him for this installation. 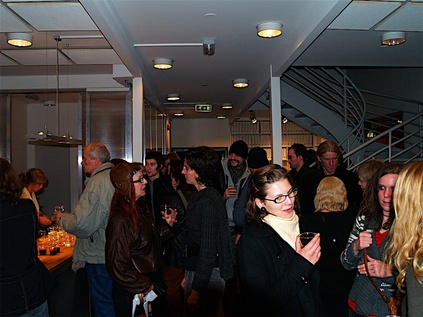 I hoped that the opening would be well-attended and I was not disappointed. I believe that there is a particularly friendly and enthusiastic atmosphere among artists in Bergen and preciously few sharp elbows. 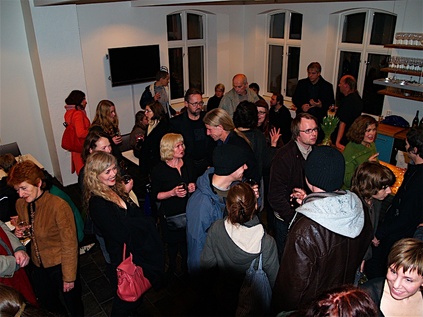 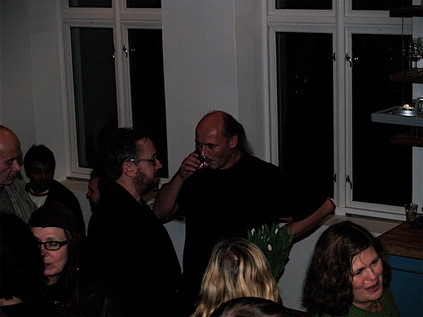 Me and Jon Arne Mogstad talking. Having collaborated on several projects and having studios next door we have been discussion on a more or less daily basis for the last three years. He has been in Drammen for the last month doing a large wall painting for a new library. One of the last days before leaving we were talking about what he was planning to do and he was particularly emphasising the improtance of how transitions from one color or field to another is done. That stayed at the back of my mind as I was working on the video material for the installation making me a lot more concious about how I was dealing with sharp transitions versus blurred edges.

The installation itself is really hard to capture as the space is very dark. Above is a shot of one of the videos a back projection presented horisontally approx. 60 cm above the floor. It is actually the stairs down to the cellar parft of the gallery that has been modified to become an object with projection. The colors are widely misleading the greem is supposed to be white or bright greyish. The photo below of yours truly in profile gives a better impression of the colors. 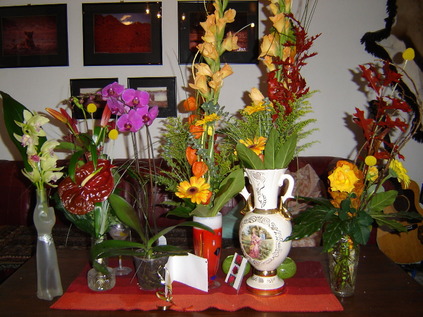 The day before the opening I was guest in the studio of the local television news and also on radio. In addition Bergens Tidende the local paper wrote about the installation.

Jeremy Welsh my main supervisor has been writing about the opening at his blog.