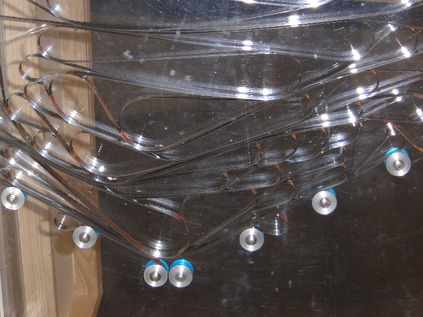 I finally got around to see the exhibition of Rodney Graham at Bergen kunsthall yesterday. It is closing in a few days time. Some of it I found quite interesting.

Corsucating Cinnamon Granules is a looping 16mm film recorded at his own kitchen lights turned of while dropping cinnemon onto a heatened stove. The resulting movie is analogue black with white pixel dust as the cinnemon lights up in the tradition of experimental film from earlier in the 20th century. It is presented in a purpose-built chamber with cinema seats. So far so good but to me the back side where the looping of the movie was exposed was more interesting. The film spilling from the camera folded itself as a continuous drawing moulded and erased at the bottom again as it got sucked into the film projector. It also seemed to have gotten into the habbit of folding at the same places every time giving a sensation of a layered prolonged memory. It not only remembered the action initially imprinted on the film but also what had been played back recently and in a more distanced past maybe all the way back to how the film first started folding when the installation was initially built and first displayed. 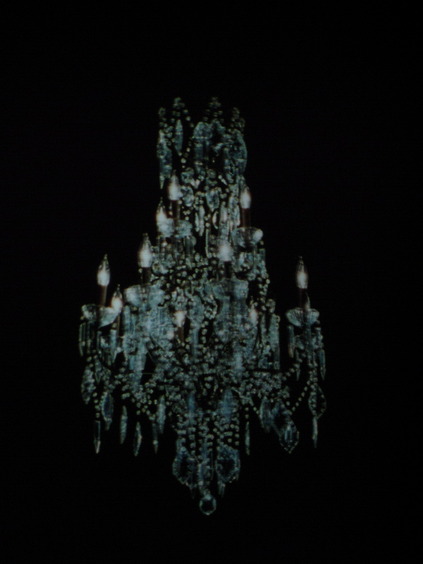 Torqued Chandelier Release is another looping film this time of a chandelier with electric light bulbs wounded up and let go so that it starts rotating. It primarily caught my attention because it resembled a section of the video work from “Concert for Greenland” by Verdensteatret. The Verdensteatret section is based on one of the rotating objects on stage mapped as textures onto a multitude of OpenGL layers in Max/Jitter. Initially appearing as a small video projection it gradually grows to enorumous size. Obviously biased I have to say that I found the Graham piece less subtle and complex.

It is interesting that they were both made at more or less the same time (2004). Waking up today and browsing through news feeds more chandeliers popped up in the blog by David Byrne. The artist Timonthy Horn is apparently having a show at Todd Hostfelt gallery at the moment including pieces of translucent plastic based on old engravings of jellyfish. Yet another chandelier showed up recently in a self-presentation by Bull.Miletic at the Art Academy. Maybe it is the zeitgeist but I rather assume that as one starts working on something one also becomes more sensitive to similar phenomena appearing elsewhere connecting them. Anyway it is part of what makes life interesting. 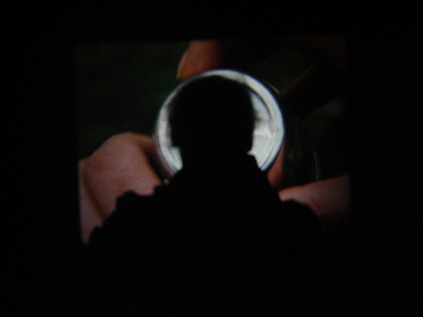 Phonokinetoscope is yet another film controlled by a record player. This time Graham himself is on a combined biking and LCD trip.

To me the most interesting aspect was a direct responce to reading Spatial Audio by F. Rumsey on the bus into town. More specifically I was reading about virtual source positioning in stereo why amplitude panning works source positioning using delays and the precedence effect. Phonokinetoscope using a stereo sound track provided an instant playground for testing what happens as I move away from the sweet spot. I didn’t have to take more than one step to the left or right before the precedence effect caused spatial spread to collapse to the nearest speaker. But the really interesting thing was that in order to be positioned at the sweet spot I had to stand in front of the film projection casting a large shadow so that I couldn’t see the film. From an installation point of view I found this a fascinating strategy of self-contradiction: Positioning medium relatively to each other in such a way that you will never be able to have an optimal experience of all at the same time. Moving around the space at least one of them will always be cancelled out by the others. This I am keeping for future use…

The rest of the exhibition I did not find equally interesting. British rock musicians from 60s and 70s to often have a tendency of ending up wandering in the direction of weird conceptual fascination for King Arthur and a Middle Age that never really existed. I am not to thrilled about that. This exhibition had a bit of that combined with a tendency of getting to “PÆN” for my taste. And sorry I don’t know how to translate “PÆN”.

Two other recent exhibitions worth seeing (both down now) were the 75 year anniversary exhibition of Bildende Kunstneres Forening i Hordaland at Hordaland kunstsenter and the exhibition by Brite Hindal at USF. Her video installations impressed me in particular the one with videos of bouncing ping-pong balls projected onto plexiglas cubes.