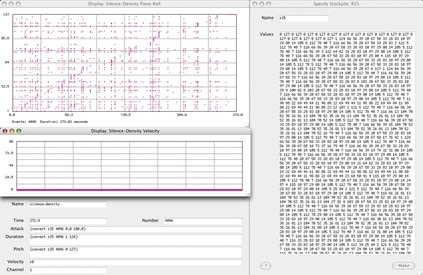 The AC Toolbox is a Macintosh application to assist the algorithmic composition of music. Version 4.4.4 requires system 10.3.9 or higher. It is a universal binary (Intel and PPC). Older versions which will run in MacOS 10.3, 10.2 and 8.6-9.x are also available.

Several models for defining musical events are included. They can be used by defining objects such as sections, shapes, masks, or note structures. It is also possible to play, plot, modify, and examine objects in a number of ways. Extensive online help is available.

In addition to Midi input and output, the AC Toolbox can produce files suitable for use as data in other programs. Score files for Csound and binary OSC files for SuperCollider can be produced. Realtime floating-point Midi output via a firewire interface to a Capybara is also supported.

An important method of creating data in the Toolbox is the use of generators. A number of generators have been included reflecting various approaches to the creation of musical material including tendency masks, stochastic functions, chaotic systems, transition tables, recursive subdivisions, metric indispensabilities, morphological mutations, etc.

The AC Toolbox is implemented in Lisp and input syntax reflects the conventions of this language. It is also possible for a user to extend the Toolbox by adding Lisp functions. Additional generators, tools, and transformers can be defined in Lisp to use with the Toolbox.

The AC Toolbox is distributed as an application. The source code is not distributed. An extensive tutorial in HTML format and a folder of files containing objects related to each chapter of the text is included in the distribution. A PDF version of the tutorial is also available.

The AC Toolbox was developed by Paul Berg at the Institute of Sonology, The Hague, Netherlands.

The screenshot above is Cellular Silence (for John Cage) by Dave Noyze, a composition of algorithmic patterns of notes with zero velocity realized using the AT Toolbox.