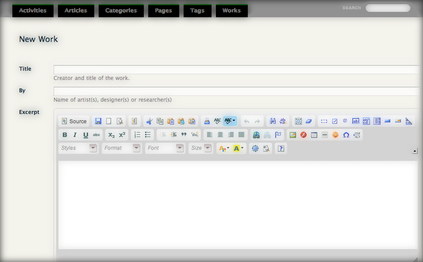 I have occasionally been dabbling with web site development for many years, but only got serious about it two years ago when me and Espen Sommer Eide started work on a new site for BEK.

Initially I considered using WordPress, Joomla or Drupal as publishing solutions, but in hindsight I am really happy that we settled on Ruby On Rails. Both me and Espen have since used RoR for several other sites as well, including this one and Espen’s blog.

However, one of the things that have annoyed me, is that there’s so much work that has to be done again and again whenever I start work on a new site. In particular development of user authentication and authorization is a boring and time-consuming task.

Enter Hobo, a Rails plugin for rapid development. More learning to do, but Hobo is exceptionally well documented.

This spring I have started work on yet another site. I am doing the programming, and Marieke Verbiesen is in charge of the graphical design. It’s the first full-fledged attempt at using Hobo, and I am deeply impressed with what it is able to do, and all the stuff I get for free. Development is probably not that much faster this time around, as there’s stuff to figure out and learn all along the way, but it feels like an investment for the future. The screenshot at the top of the post illustrates the yesterday’s achievement; implementation of CKeditor, a WYSIWYG text and html editor improving user friendliness for content providers.

The web site is not publicly available yet, but I’ll announce it in due time.