AppleScript for fullscreen video in QuickTime 10 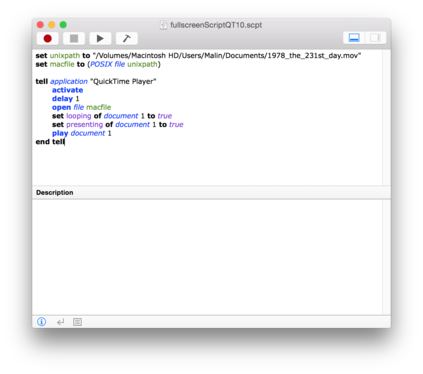 When God invented programming, the devil came up with AppleScript.

I have just been setting up two macs to play QuickTime movies fullscreen for an exhibition opening tonight at 3,14. I am using AppleScripts to ensure that video playback starts once the computer is booted, and that video plays back in fullscreen with looping.

The AppleScript I blogged some years ago works just fine on one of the Macs, but on the other one the movie refuses to loop and go fullscreen. This is with the same script, and same version of QuickTime.

Having googled around for quite a while, trying different variations on AppleScript syntaxes for QT 7 and QT 10, I finally found the scripts that bijazzard has posted to GitHub. His script for QT 7 is the exact same as mine, but his script for QT 10 saved the day.

I’ve uploaded the script here in order to make sure I have it for the next rainy day.

New OSX versions equals new problems and more band aids. Here’s an updated version that currently works with OSX 10.11 El Capitan. I had problems with the delay command not working properly, and resolved this by controlling the delay via a shell command, as discussed in this StackExchange discussion.