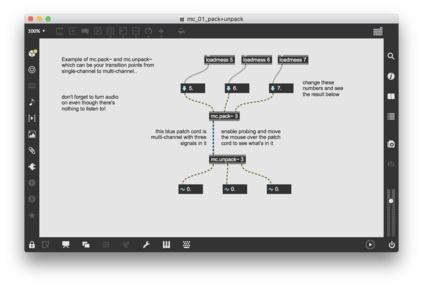 Back in 2006 I came up with an idea for how to make audio signal patch chords in Max have multiple channels.

A few years later I discussed the idea with Timothy Place and other Jamoma developers during a developer workshop at the fourMs lab at University of Oslo. I managed to secure some funding from the Municipality of Bergen for development, and Tim, me and Nils peters started developinbg Jamoma AudioGraph. Initially AudioGraph was called “multibær”, inspired by a dessert at a restaurant up in Holmenkollen. That name was Tim’s idea…

Jamoma AudioGraph was kind of nice, and the three of us submitted a paper for DAFx 2010 on it. However, it was CPU-innefficient and prone to crashing. Jamoma AudioGraph never became more than a proof of concept, but I’d say that the concept itself was thoroughly proven.

Today Max 8 has been released, and the Cycling’74 fairies have been delivering the feature request wish that I have been nagging tham with for the past ten years. The new set of mc multichannel objects is all that I have been dreaming for.

Now, if Ableton Live 10 now can be extended to support multichannel on its tracks in a similar way to Reaper, that would be awsome! But regardless, Xmas came early this year!