This week I am in Dublin doing a Erasmus exchange at National College of Art and Design. Not a lot of time to blog but yesterday I went to see the retrospective exhibition of Laurie Anderson at Ireland Museum of Modern Art.

Per Roar is doing a work-in-progress presentation of “a rehearsal of mortals” tomorrow and the day after. More info at his blog.

When searching for the determinant factors of digital audio production
its forms and compositional strategies mere technological criteria
become less important in the light of the pervasion of information
technology into audio media. “Computer als Klangmedien” (Computers as
Sound Media) the topic of the 1993 Hyperkult III have become
omnipresent. Even the traditional domain of digital music the “Computer
Music” with its core elements algorithmic composition and sound
synthesis can be found in a broad practice of digital production within
mainstream pop music. Compositional as well as sound-aesthetical
traditions of “Elektronische Musik” and “musique concrète” become base
elements of a popular or less popular avantgarde that is positioned
beyond historic dogmas.

At the same time artistic as well as scientific discourses discover
electronic sound as a central area of present-time culture. Apparently
the abstract soundworlds of electronica do not only represent the
digital lifestyle but also come to be the projection space of
techno-cultural change. Phenomena of hybridism as they were described
in the 90s caused by the disbandment of familiar boundaries between
technology nature and culture between plugged and unplugged and also
between Art and Pop Music now gain new actuality with the reintegration
of analog sound synthesis tube amplifiers and manually operated
instruments into the digital environment. On one hand hybrid technology
corresponds with a hybrid culture of merging established oppositions
however does it also often aim at creating fotorealistic simulations of
its predecessors.

Against this background how are methods contents traditions and
creative strategies changed? Which relations exist between digital audio
media and auditive forms and processes? Do distribution and
collaborative production in digital networks call for a new definition
of the musically interested public? Which technological innovations will
give direction to future practices? HyperKult 14 wants to debate these
and other questions in an interdisciplinary dialogue and take the chance
to reach an up-to-date positioning of digital audio media. Contributions
from diverse scientific and artistic plateaus in the field of audio
compression methods sound synthesis sampling software-tools Creative
Commons avantgarde-pop sound art sound culture informatics cultural
and media sciences are welcome.

The HyperKult will have an extended exhibition area with the topic
communications . The goal is to advance the practice-related exchange
between projects organisations labels and musicians (etc.).
Interested parties are hereby called upon to participate with
presentations. A registration is obligatory due to limited space.

In line with the HyperKult 14 the annual general meeting of the section
will take place on July 16 2005.

" HyperKult – Computer as Medium" takes place as an annual (non-profit
and no-budget) symposium since 1990.000 Hyper(media)Kult(ur) was an at this
time an upcoming field of research across the borderline of technical
and cultural disciplines. HyperKult has broadened over the years to
examine more general questions of the relationship between cultural
especially aesthetic development and information technology. HyperKult
is organized by the department “Kulturinformatik” of the University of
Lueneburg in Kooperation with researchers from Humboldt University
Berlin and the University of Basel (Switzerland).

Lately I’ve been working on a template for building VST instruments using Pluggo. I’ve wanted to make a very simple soft synth but containing the kind of features that I’m likely to want for any soft synth I might make:

Apart from these features the template is really simple: Nothing but a sine oscillator.

The general idea have been to make a template so that in the future I won’t have to think (much) about Pluggo stuff as I’m patching but can instead fully concentrate on the DSP processing involved. 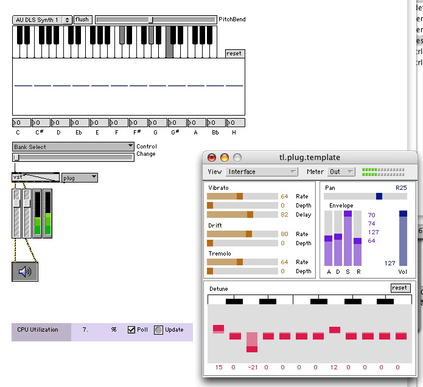 Impulse Modeler is a Windows app to create impulse responses from simulations of room designs. Voxengo also has a number of other apps and plug-ins that seems interesting. 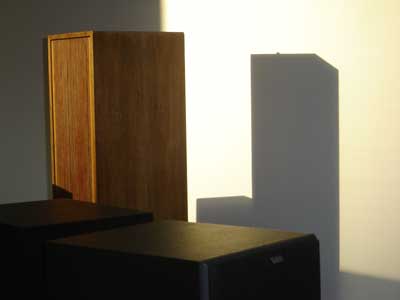 The days gradually gets longer. Today the evening sun quickly passed by my office for the first time this year. The loadspeakers silently greeted it by forming a skyline.

Carey Dodge has made a spatialisation patch for MaxMSP that can be downloaded from C74/share.

As part of the VSTi template development I was wondering if vibrato on a polyphonic synth would be driven by a single LFO or if a separate LFO would be implemented for each voice. Tests on a Yamaha MU90R revealed that for that synth separate oscillators are used for each voice.

In the last month or so there has been an ongoing discussion on the Max mailing list on how to deal with timelines cues etc. and the needs for further development.

My suggestion have been that C74 could adapt the solutions developed by Tim Place for Jade. Further development of the pattr system seems to be likely but not as extensive as I would like to see.

The really good news today is that Tim Place has announced that he’s relaunching the Jamoma project licensed according to Lesser GPL. This mean that it will be a generally available solution can be adapted to fit your need. I’m willing to commit myself to contribute substantially to this.

I don’t know what state Jamoma is in at the moment there’s no downloads available at Sourceforge yet but if possible I’d like to use it for a two week tour in april. I’d also have time for testing and further development. I’d reallyb love to see this baby growing up. Fast!

sfSoundRadio is an internet radio station that showcases experimental improvised electronic contemporary composition and other forms of new music heard in the San Francisco Bay area.

Another two day seminar of the fellowship program. The first day was spent on a kind of workshop on working on press relations with Anders Cappelen. Not extremely important or relevant for me at the moment. Slow moving and strange setting: The fellows positioned two and two at tables with supervisors and the program comitee surrounding us. Kind of “back at school” with 30 persons observing us. A lot of the supervisors felt the day wasted. Not a terribly productive day for me neither. Besides I was tired having stayed up all night.

I miss a stronger focus on the art and art processes themselves during these gatherings they don’t manage to cut to the core of the program being an artist and doing art based research and development.

I never learn. The sound for Trickster had to be finished today burned to CDs and mailed to the gallery at Stord. Of course I didn’t manage to finish earlier and stayed up all night finishing just in time to get a shower and set of to the airport in order to attend a two day seminar of the fellowship program.

Observing my own ways of working for the last 1 1/2 year has been surprising and revealing. When I first entered the fellowship program I imagined having more time for developing my projects working on each project for a much longer time spans than before. Instead a very different patern has emerged. First comes a period of research and this is generally much longer and thorough than before. During this phase I’m testing and developing new techniques reading thinking defining and redefining concepts working on large scale problems but only making brief and very loose sketches for what I’m actually going to do what material to use and how it’s going to sound.

The actual making of the work only really takes place during a short period as I get close to the deadline.

If I start working on the realisation to early I tend to loose faith in my own ideas or change focus along the way. Also if I spend to much time doing and redoing the material the material easily ends up being overworked loosing freshness and presence.

When doing sound for installations in collaborations with other artists a lot also depend on the space we’re using how we’re responding to it and how it’s shared and used between us. This is often impossible to know until we’re in the room preparing for the installation. For instance I have to see how the material work with the acoustics of the room. In the same way as a painter have to mount his works in the room the way it’s mounted being highly influential on how it is perceived I have to mount my sound and this is an act of physicly workin in the gallery space.

All of my research into FTM SDIF analysis resynthesis spatialisation and the building of pluggo instruments in the last months came into use for this project but I started later than ever making the actual sound. I’m planning to travel down to Stord in the coming weekend to see how the sound combines with the photos and how the CD-players and headphones work out and consider if adjustments need to be done.

Before lunch the new fellows presented their revised project descriptions. Amanda Stegell of Motherboard has been permitted to convert her research project into the framework of the fellowship program and got to hold a more thorough presentation. The subject of her work is MIND THE GAP (synaesthesia and contemporary live art practice). Amanda has found a very nice way of documenting her own work online.

After luncg the quality of artistic works was the topic of presentations and discussions. I found Einar Solbu’s keynote particularly interesting. He made three main points:

Here’s some random notes from the discussion:

Lunch with Karen Kipphoff professor at the Art Academy and loose discussions on a collaboration we’ll be doing for an installation at Bergen Kunsthall in November this year.

Robert van Heumen of STEIM had a presentation at BEK today talking about his own work STEIM Lisa Junxion and more.

For some reason STEIM will soon be hosting a workshop on shadow theater. The work of Verdensteatret immediately came to mind as being very relevant in the context. I had to leave a bit early to pick up my kids at the kindergarden and didn’t get to talk to him afterwards but a connection between Verdensteatret and STEIM could be very interesting I believe.

This week the Borealis festival of contemporary music is going on in Bergen. Today and tomorrow the Art Academy is hosting a number of presentations. First out today was Justin Bennett whos work I really liked. Next Leif Inge talked about 9 Beet Stretch to be presented at Bergen Domkirke starting at 13:00 and continue for 24 hours.

After lunch with Justin I went over to listen to 9 Beet. It was impossible to get away I stayed for 3 hours. It took me half an hour to manage to get out of the place. Totally captivating.

In the evening: Kreutzerkompani presenting Krets at Teatergarasjen. Sound by Justin and stage design by HC Gilje.

Tomorrow Gavin Bryars and Terry Riley are giving presentations at KHIB and BEK respectively. They are partly overlapping in time so I’m not sure that I’ll be able to attend both of them.

…moving to a new position making a statement moving on…

This is a test to see how moderating comments work. Hopefully I’ll be able to avoid comment spam.