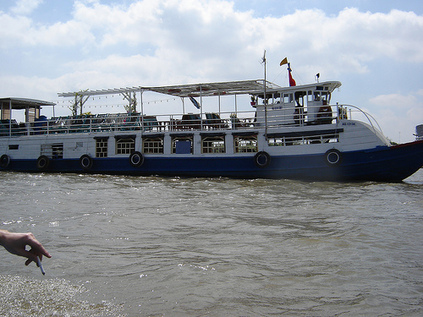 In February I went to Vietnam with Lisbeth Asle Håkon and Piotr of Verdensteatret collecting material for the next production. I was there for 10 days but the others stayed for five weeks with some of the actors joining in after I left. The time I was there was spent in the Mekong Delta. Above is the boat we used with the Verdensteatret trademark in the foreground. 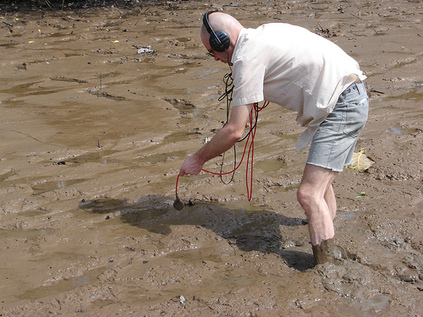 Håkon at work tapping into the sounds of the mud at the river banks. 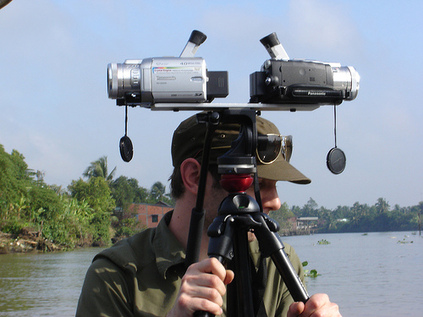 Piotr did a lot of video filming using two video cameras simultaneously. I am curious to see how the material will be working and how it can be used. If installation art implied a human condition as fragmented multiple and decentered denying one “right” way of looking at the world this could be seen as a similar approach to video filming. 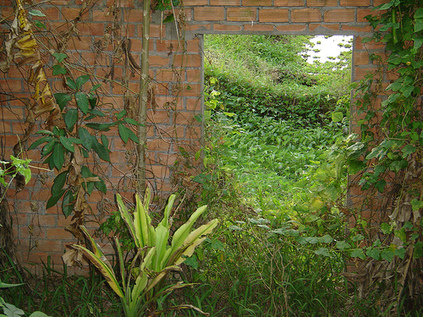 Before leaving for Vietnam I did not know what to expect so I ended up having no expectations at all. It certainly did not at all resemble any impressions left by the numerous movies on the Vietnam war (or the American war as it is called in Viet Nam). We seemed to be there at the driest part of the year. The sun high temperatures and nice weather was very welcome to me just having experienced 80 consecutive days of rain in Bergen. In spite of Viet Nam being a single-party socialist state the military were nowhere to be seen a very pleasant surprise.

We seemed to be on an ever-failing quest for untouched wilderness. Maybe this was a Norwegian reaction to the dense population a search for similar remote and desolate places as we imagine to find in Norway (although they are dwindling by the year with 1/3 of untouched land lost since 1970)? The Mekong delta seemed a jungle turned suburbia. Substitute palms for pines rain for sun roads for rivers and multiply the amount of people by 100 or so and it would not be that much different from Å sane.

Earlier Verdensteatret trips have had a tendency of being left of center places like Illulissat Greenland or Odessa Ukraina. But this felt further left than ever. Murray Schafer discuss soundmarks aural equivalents of landmarks. I came home with three such soundmarks ringing in my head: The sound of scooters the sound of the engines of the boats at the rivers and Hello! What’s your name? a phrase constantly heard for the duration of the stay. It was utterly impossible to become an invisible observer wherever we went we seemed to work as catalyzing agents disturbing the equilibrium of everyday life by our mere presence. I found it difficult to film either I would have to do it openly catching and interacting with the situations occurring because of my presence or it would have to be done secretly. I also noticed that some of the obvious motives such as the river banks drifting by as the boat sailed the delta did not appeal to me. The journey seemed to stir up some of the same motives as previous trips: people at the market place landscapes passing by while traveling the recording of someone calling Hello! What’s your name? at a distance. All of these we have used before for Tsalal or Concert for Greenland. 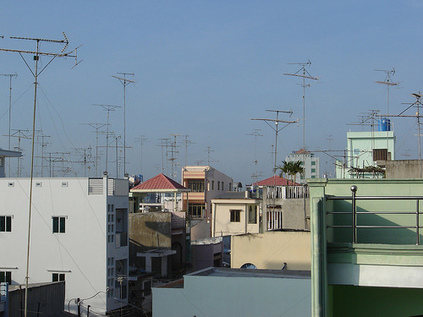 What did catch my attention was the new forest spreading out seemingly growing rapidly: The antennas at the top of the houses. I think I have hours of filming of them against a blue sky.

The AudioBox AB64 is a hardware-based system for sound reproduction and control in a stage setting. It is made up of a 64×64 channel matrix mixer a 64 channel hard-disk record/playback system and show-controller software based on the MIDI show control protocol. The hardware is hosted in a 2U rack unit.

TTA Track The Actors transforms mono signals from actors to a maximum of 16 speaker channels. By using psychoacoustic theorems the sound is given direction. The stage floor is divided into small squares (audio zones). The actors wear small small radio transmitters used to determine what zone they are positioned in. Each audio zone has a distinct matrix setup to allow the sound seemingly to originate from this point on stage with smooth transitions between the audio zones. The system supports up to 32 inputs and 16 outputs. TTA is a Norwegian company. I’ll have to get in touch with them.

As far as I can see it is not stated what principle is used for diffusion of sound in the above solutions. Also they seem limited to dynamic playback of prerendered sound files or real-time diffusion of live sources respectively. None of them seem to offer more complex show-scripted live processing and diffusion of sound.

My method was to get into the office and work for twelve hours six days a week. Something would come out of it.

When I entered the fellowship program I soon felt that developing and then pursuing a “3-year plan” was a meaningful way of working. I decided that I would avoid making immediate plans for artistic work after the end of the fellowship and spend the Easter 2007 thinking of where to go next making a new long term plan. Of course I failed to do so: Easter is spent in Oslo working with Verdensteatret on upcoming productions.

One of the tasks we have been working on is how to make a vibrating amplified string. The first approach was to start out with an electric guitar. 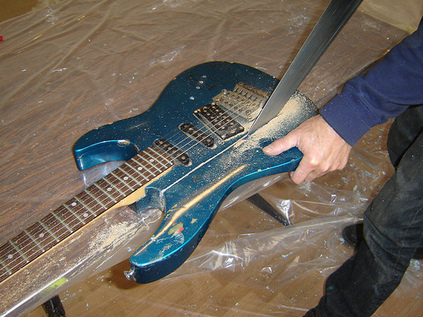 Is this how Eno did the sky saw guitar? 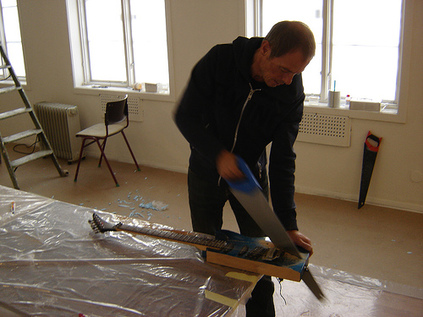 And we got some nice surfin waves for free: 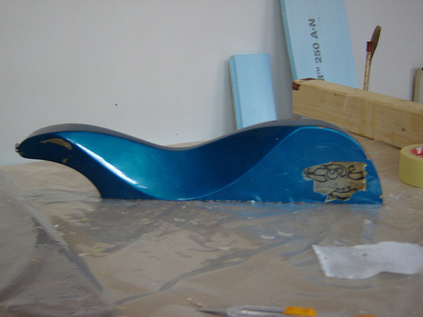 An image from an improvisation today using megaphones that håkon brought back from Vietnam. We were testing dbap (distance based amplitude panning) for diffusion of sound and it worked remarkably well. Piotr is projecting onto some of the speakers. 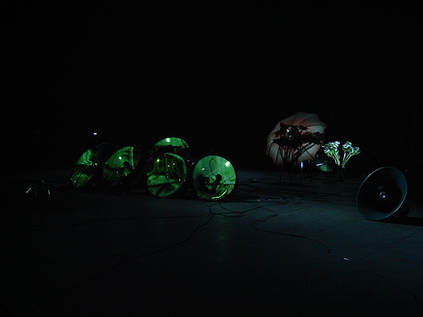 Two weeks ago I was in France for a Jamoma workshop in albi and a one day workshop in Paris. At the end of the trip we had some time left for going touristic. Me Tim Place and Dave Watson went to the Notre Dame. Outside I was pondering if there are any connection between this kind of embellishments and the Norwegian fairy tales about headless trolls. I heard someone saying “Trond” behind my back turned around and looked into the smiling face of Kurt Ralske. He was in Paris for two days. A surprising but very pleasant surprise! 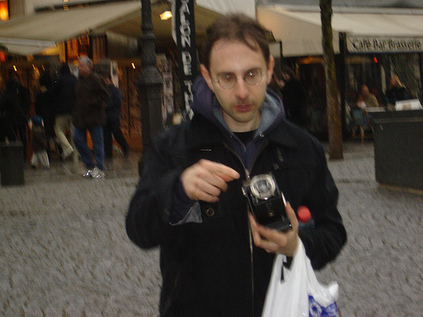 HC Gilje has started blogging related to his fellowship project. Well worth reading in particular as some of the first posts show documentation from some project that to me seem truly stunning. I wish I could have seen the 2006 Dense installation. Access the blog and more here.

For some months now most of my equipment has been stuffed away at a small office at KHIB as I had to move out of the studio I had for the duration of the fellowship so that HC Gilje could move in.

I have finally found a new studio and at a cool location too. I knew that it would either have to be located close to BEK where I am now working or close to home. Else the chance of finding time to use it would become small.

The new studio is at CCB at Å gotnes a supply base for the offshore industry 10 minutes of biking from home depending on the wind. It is a fascinating industrial area one of the places keeping Norway running as a wealthy country. Having been there a few times it is striking how this part of society is seldom captured or dealt with in Norwegian contemporary art. It makes me wonder to what extent these parts of contemporary Norwegian history in the making are captured by anyone at all.