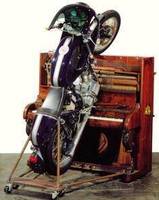 ‘Sound of Art’ shows up the bonds between music and visual arts. The exhibition will present scores objects photographs videos and video installations records of actions and many more exhibits. Right at the beginning the exhibition focuses on its main themes: the radical break of the avant-garde art movements emerging at the beginning of the 20th century with 19th century bourgeois culture (dominated by the cult of genius classical instruments musical harmonies and melodies etc.) and the various revaluations of its inherent categories such as virtuosity.

The young artists of Italian Futurism for example contrast harmonious music with the sounds of everyday life and the rise of technology Luigi Russolo even invents special instruments the so-called ‘Intonarumori’. At a much later time Günther Uecker alludes to the political aspects of Futurism with his ‘Orchestra of Terror’ which consists of sound-producing objects. During the second half of the 20th century the American musician John Cage introduces a fusion of different types of art with regard to sound organisation and listeners’ perception into the world of music and art. Since then numerous artists have dedicated objects to this important intermediary between visual arts and music. As an important inspiration for the Fluxus movement the show presents works by Fluxus artists that refer to Cage himself his propensity towards changing technical aspects and integrating electronic elements or to continue the principle of ‘calculated chance’ in the actions of the Fluxus movement. In 1959 Nam June Paik for the first time introduced the concept of action music in his ‘Hommage à John Cage’.

In this work incidental tones and sounds have the same significance as the classical sounds of an instrument or the moments of silence. The correspondence between body and instrument is also made visible in the Fluxus movement. In 1967 the violoncellist Charlotte Moorman performed topless in the production of Nam June Paik’s ‘Opera sextronique’ thereby making explicit the obviously obscene correspondence between the anthropomorphous cello and the violoncellist. These and other works of art which all make the connection between body and instrument evident are juxtaposed to paintings from the 19th century depicting women playing the piano with ordinary distances and postures. Carricatures of Niccolò Paganini or Ludwig van Beethoven at the end of the exhibition parcours close the circle as early forerunners of a countermovement that introduces dilettantism and anti-virtuosity as a principle of art during early 20th century avantgardism.