Tip of the day: Print resolution screen captures in Max 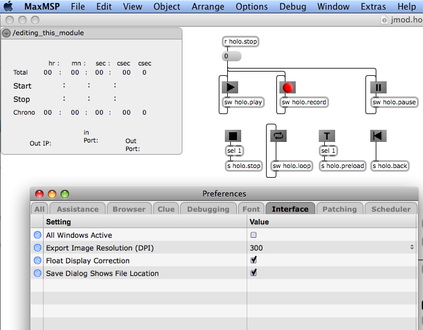 In the Max preferences there’s an option to set export image resolution (DPI) for screen captures. Handy when screenshots are required for publications, posters, or other print purposes.

I have just completed porting all blog posts over from the old Zope-based server. I started blogging shortly after entering the The National Norwegian Artistic Research Fellowships Programme in the fall 2003. A whopping 800-something blog-posts where stranded when I revamped my web site some months ago, and now, finally, they have made it over here.

Some bits and bits have have drowned in the eternal ocean of bits and bytes, notably a number of comma signs (,). I ended up using Max(!) to transform the text file exported from Zope into something that could be imported into Rails, and along the way forgot that certain characters have reserved meanings in Max. By the time I realised, I had already spent way to much time further reconditioning the data to want to step back. If you see something else that needs urgent attention, please let me know.

Here’s a screen shot of the patch used: 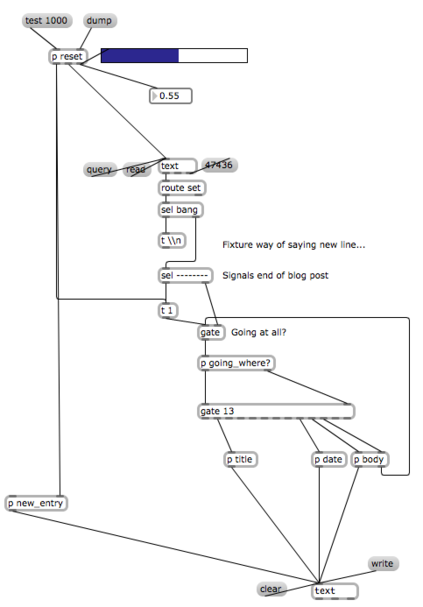 A UNIQUE OPPORTUNITY, 5 days training on an acousmonium of more than 40 loudspeakers

The stage is focused on how to analyse the spatial dimension of acousmatic pieces, and how to emphasise the spaces created by the composer while performing. Even further, how to create yourself dynamic and spatial movements in the piece performed. The stage combines analysis and performance skills and ends up with a concert with all participants on the last evening of the stage.

The stage is taught by Annette Vande Gorne (composer and professor to the Conservatoire Royal de Mons, electroacoustic section)

John Cage made «Variations V» in 1965 for the Merce Cunningham Dance Company. He and David Tudor settled on two systems for the sound to be affected by movement. For the first, Billy Klüver and his colleagues set up a system of directional photocells aimed at the stage lights, so that the dancers triggered sounds as they cut the light beams with their movements. A second system used a series of antennas. When a dancer came within four feet of an antenna a sound would result. Ten photocells were wired to activate tape-recorders and short-wave radios. Cecil Coker designed a control circuit, which was built by my assistant Witt Wittnebert. Film footage by Stan VanDerBeek and Nam June Paik’s manipulated television images were projected on screens behind the dancers.

The score was created by flipping coins to determine each element and consisted of thirty-five «remarks» outlining the structure, components, and methodology. The specific sound score would change at each performance as it was created by radio antennas responding to the dancers’ movements.

In this photograph «Variations V» is performed for a television taping session in Hamburg. The photocells were located at the base of the five-foot antennas placed around the stage. Cage, Tudor, and Gordon Mumma operate equipment to modify and determine the final sounds.

The project was also presented at the Philharmonic Hall in New York, 1965.

Chance Conversations: An Interview with Merce Cunningham and John Cage.