Over the last week I have attempted to install the current version (1.6.4) of TortoiseSVN on 3 different PCs, and failed on each of them. Finally I came across this link that provides an URL to the 1.6.2 installer, and that seems to work.

I arrived in Montreal yesterday to attend “ICMC2009” and a subsequent Jamoma developer workshop. Today I have been attending the workshop on Genesis.

Genesis is a software environment for musical creation by means of mass-interaction physics network modeling, developed at ACROE in Grenoble. I first learned about Genesis when the Italian composer Giuseppe Gavazza was an artist in residency at USF some years ago. He showed the program to me, and also gave examples of how he had used it to generate and process sound material for a number of compositions and installations.

Back then Genesis was running on Silicon Graphics, mening it less accessible than most software for music production. It has since been redesigned to run on OSX and Linux. Genesis can be used to build physical spring-mass models somewhat similarly to what can be done using PMPD or MSD can do in Max and Pd. There are some differences though:

It was an interesting workshop. Genesis functionality could probably be emulated in PMPD and MSD by writing generated date into buffers, but the really interesting aspect of the workshop was the experience and knowledge about physically modeling accumulated though research and creative projects spanning more than 10 years.

I hope that I’ll be able to continue working with Genesis in the future.

Video of stuff that Richardo de Pozo is currenly working on, a Jamoma wrapper for the elasticindex~ external for Max. 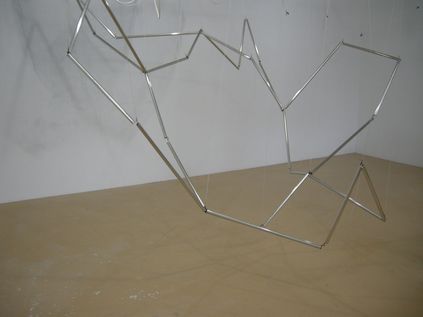 We attended an opening at Clark Gallery yesterday, featuring the work “Interlinked Pentacles” by Jean-Pierre Gauthier.

Jean-Pierre Gauthier’s work Pentacles imbriqués, which follows in the recent sculpture series “Instants angulaires,” is presented as a mobile structure programmed to move an assemblage of chrome steel poles. These poles-actually shower curtain supports-draw disjointed movements in the air that ceaselessly deconstruct and reconstruct “variable-geometry forms.” The audio capture and amplification of the internal resonances caused by rice grains hidden inside these metallic tubes generate a subtle soundtrack. The structure’s morphology and atypical motions in combination with the reuse of a banal object evoke a recurrent theme in Gauthier’s work, i.e. the fictional and disordered world of an obsessive-compulsive janitor. The sculptural, mobile and audio dimensions of the ensemble all partake in this unusual and hectic world.

JP visited Bergen in 2007, exhibiting at Lydgalleriet, and also gave two workshops and an artist presentation at BEK. It was nice seeing him and his girlfriend again. As an added bonus, I also got to say hi to Peter Flemming. Peter was an artist in residence at BEK in 2003. 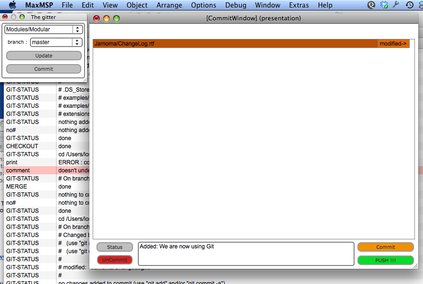 For the last week, in the aftermath of ICMC2009, we have been doing a Jamoma development workshop in Montreal.

The Jamoma project has grown increasingly large and complex. In Albi last winter we discussed how to think of the project, and conceptually reorganized Jamoma to be a framework for a number of efforts or sub-projects, the common factor being that they all are be catering for and contributing to research for and in the arts.

The Jamoma web site was redone last spring, as we were moving away from Zope:

The structure of the main web site and Redmine now reflects the various sub-projects we are dealing with. GDIF and SpatDIF are two additional independent projects, their association with Jamoma being that Jamoma is used as a development environment for prototyping the specifications.

We expect the new structure to be flexible enough to be able to cater for management of additional sub-projects in the foreseeable future.

One of the major outcomes of the workshop this week has been a total overhaul of how the source code of Jamoma is maintained. SVN has served us well for a long time, but the project has grown to consist of four separate repositories distributed between SourceForge and Google-code. Also there has been a growing need for being able to work with parallel branches. For some of us, it has also been a shortcoming that SVN requires you to be online in order to be able to push commits to the repository.

Earlier this summer, I set up GIT locally to work with SVN. This enabled me to keep working on Jamoma during my “summer vacation”, although I could be without internet for days. Tim has also checked out GIT over the last month, and found it attractive enough to start porting the repositories.

In spite of a bit of growing pains, the new git stuff now seems to start coming together, and I guess we’ll all gradually get used to it. Theo has done a great job over the last week getting the Windows externals to compile again after reorganizing, but the windows externals remains to be tested thoroughly in Max. Pascal has done his best to make life simpler for the ones of us using OSX by implementing a “git client in Max (see screenshot above). It is pretty impressive. As for myself, I have spent a lot of the workshop documenting the ”caps">GIT work flow on Redmine.

Spending this much time on project administration can feel a bit tedious, but I am convinced that it will pay of in the long term. Hopefully we will get much better at keeping a fairly stable master branch in the future, even at times when we are in the middle of major revamps of core code of the project.

A new career in a new town

As of tomorrow I’m no longer the director of BEK. I’m also reducing my position at BEK to 50%. For the next year I’ll be combining this with a 50% replacement teaching position at the art academy, where I finished my research fellowship 2 1/2 years ago. I had my first day at the art academy today. Tomorrow Lars Ove Toft starts working at BEK.