Emilio Chapela is offering an insight into the web’s collective unconsciousness, in the form of Google auto-complete suggestions to questions such as “why are Mexicans…”.

I had to test for myself:

Bummer, I should have stuck to music: 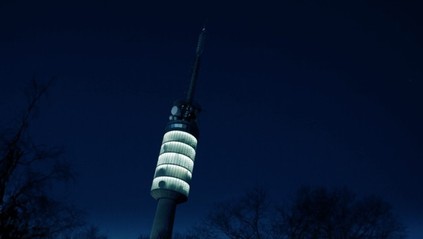 I’ve done some minor fixes to the RSS feed of this site as well as BEK. At the BEK site the feed will contain images and information about time and place for projects.

In the process I also discovered a typo in the code for RSS feeds at this site, that might have been the reason why images did not always show up.

This is a test post to see how RSS behaves now. If you notice problems, please notify me. In order to see the image above, you might need to enable JavaScript in your RSS reader. 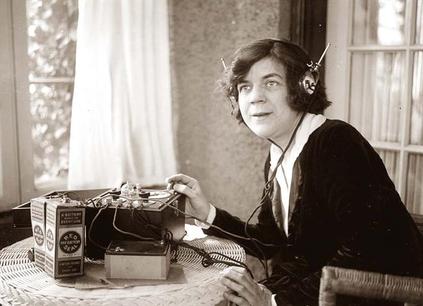 In a discussion with a student today, different ways of listening to, thinking about, analyzing and creating sound came up. In a few minutes the following where identified. More could probably be added (insert bibliography here):

The different modes of listening are not excluding or competing, it’s more like viewing the same sculpture from different angles.

The possibilities for exchange of projects back and forth between Final Cut and SoundTrack (or Logic) are truly great, but come with a few gotchas.

Having captured the video documentation, I started out organizing similar shots into groups, and then decided what to use for most of them in separate sequences. Afterwards I composed the main flow of the documentation video by organizing these nested sequences in the main sequence, and deciding where to start and end each of the sequences.

So far so good. Only afterward I discovered that the sound and video of nested sequences is not exported to Sound Track. The video part I can circumvent by rendering the video, but I don’t find any way of gtetting the audio across.

For this project it is not to much of a deal, as I am going to scrap most of the audio anyway, instead using separate audio recordings done at the space.

But for the future it’s worth remembering. And I don’t manage to find a way to unnest the sequences.

That is where I realized how spoiled I am in Max with the ability to encapsulate and de-encasulate of subpatches.

Issue 11.4 of eContact! contains the proceedings of the Toronto Electroacoustic Symposium 2009. Among the topics discussed are acousmatic music and sound and space. 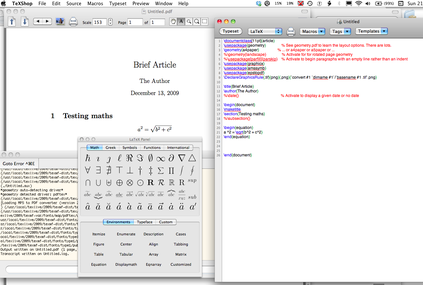 I’m slowly starting work on a number of papers, in collaboration with fellow Jamoma developers. In the usual way it starts of with a bit of procrastination, and downloading the latest version of MacTeX, TeX for Mac, seemed a valid excuse.

For quite a while I have used TextMate for work on LaTeX and ConTeXt, but the latest version of TeXShop (included as part of MaxTeX) comes with templates and a palette that seems to make it quite efficient for typing up equations and other kinds of stuff using obscure commands that I never remember the syntax for.

I’ve done some minor changes to the code of the web site today that should make it scale better on iPhone.

This appears to be a good resource for info on how to ensure that web sites work well with iPhone. 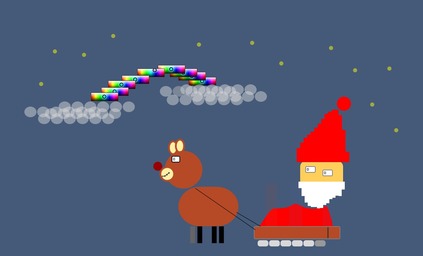 I remain impressed with the latest version of the IRCAM Spat Max/MSP library for live spatialisation.

I have for some years maintained a small Jamoma UserLib with Jamoma module wrappers for a few of the functionalities offered by Spat. So far the purpose has been to make available to Jamoma some essential functionalities and externals from Spat that are not freely (or GNU LGPL compatibly) available elsewhere: Air filtering and binaural decoding of ambisonic B-format signals. Up until now these were based on prior (3.x) versions of Spat. Today I updated one of them, the air filter, to work with Spat 4.1.5. The other module require more work, and might get abandoned for other and better implementations. It is tempting to start a much more thorough Jamoma wrapping of all of Spat, as a supplement to the other functionalities for spatialisation already present.

The pdf documentation of Spat seems to be in a transitional state between versions 3.x and 4.x currently. This is actually a good thing, for me at least, as it reveals more of the inner logic of the system than the objects provided in Spat 4.1.5 do.

I notice structural ideas related to the stratified approach to spatialisation proposed in a paper by Nils Peters, myself and others at the SMC 2009 conference:

In our model, the DSP processing required for spatialisation was structured according to two layers, the endocing and decoding layers. 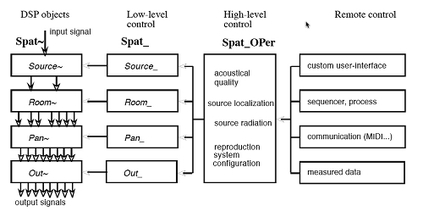 Quoting the documentation “the reunion of these four modules constitutes a full processing chain from sound pickup to the output channels, for one source or sound event. Each one of these four modules works independently from the others (they have distinct control syntaxes) and can be used individually. Each module has a number of attributes that allow to vary its configuration (for instance, varying complexities for the room effect module or different output channel configurations for the directional distribution module). This modularity allows easy configuration of Spat~ according to the reproduction format, to the nature of input signals, or to hardware constraints (e.g. available processing power).”

Update: SVG files apparently do not work to well with RSS readers, so the last image shows up as cropped or not at all in the feeds I have tested so far. 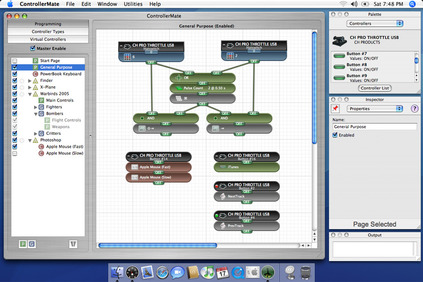 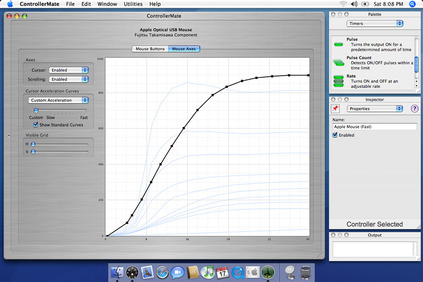 ControllerMate is a controller programming tool that allows custom functionality to be added to standard HID devices (joysticks, trackballs, gamepads, keyboards, and more)

Using a graphical interface and drag-and-drop editing, users can program controller buttons to perform complex keyboard and mouse sequences. Programming is accomplished using “building blocks”. Each type of building block performs a different type of function. Building blocks can be individually configured and linked together to perform an endless variety of tasks. 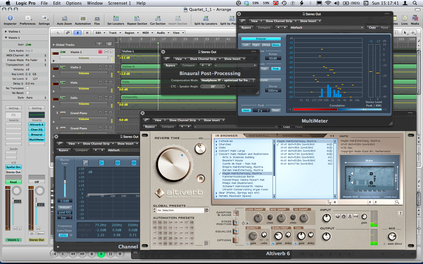 Following up on the discussion yesterday I today did a case study on spatialisation in Logic Pro to get a sense of the workflow in DAW (Digital Audio Workstation) software, and how/if the stratified approach makes sense.

The Logic Pro 9 project is based on a MIDI file of the 1st movement from the String Quartet Op 18 no. 1 by Beethoven, retrieved from Kunst der Fuge, an eminent online resource on classical music MIDI files.

The four voices are all synthesized using the Audio Unit instrument Synful Orchestra v. 2.5.2. Synful uses reconstructive phrase-modeling for mapping of gestural performance data to the synthesis engine. Further details on Synful can be found here.

The resulting audio file is provided above. The Logic project can be downloaded here.

From the quick test the layered approach does seem relevant for spatialisation within a DAW context, and the various layers are easily identified. The additional layers proposed from Spat as discussed yesterday do seem relevant to the discussion of this example:

Compared to the layered model proposed in Peters et. al. (2009) Spat further details the DSP processing part of the spatialisation. The identification of source pre-processing (early reflections), room modeling (convolution reverb) and post-processing (EQ) all appeared relevant in the example. The separation of early reflections and late reverb makes sense also in terms of how they contribute to the spatial impression: While early reflections might contribute to the localization of the source within the space, the late reverb mainly provides clues regarding acoustic properties of the room the sound is situated in as offering a general colorization and blurring of the source that often will be considered aesthetically pleasing. Spat seems to offer a more precise model for specifying and processing reverberation as compared to our model proposed at SMC 2009.

As a final observation this example illustrates that the layered approach is not necessarily strictly mirrored in the signal processing flow. In this example binaural encoding have to be considered to belong to the decoding layer. Still the binaural plu-in is inserted at the end of the signal chain, after EQ post-processing.

Concluding this post, I have also spent time today looking into and reading up on how surround processing is handled in Logic. It is restricted to established consumer/prosumer formats (mono, stereo, quadrophonic, 5.1, 7.1), not offering possibilities for arbitrary configurations of speakers and channels. But for the formats it is catering for, I have to say hat I am pretty impressed by what it has to offer. The up-scaling of mono and stereo effects for multichannel processing very much resembles ideas we have within the Jamoma team for Jamoma Multicore effect processing.