Traditionally, January seems to be one of the most active months for Jamoma development. This year was no exception. Here are some highlights:

Tutorials on spatialisation in Pd 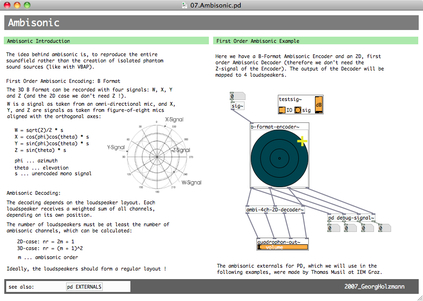 Georg Holzmann did a workshop on stereo, multichannel and binaural sound spatialization in Pure-Data at the Linux Audio Conference 2007. The patches are available here and provides a quick overview of how spatialisation is handled in Pd. On the audio graph level it seems to be more or less the same as in Max, as expected.

FIAT LUX was a collaboration between Josefin Johansson, Daniel Sørensen and Ricardo del Pozo for Oslo Fashion Week, dressing models through the use of video projections, and receiving rave reviews:

In times of financial crisis, recession and too much focus on commercial values in the fashion industry, it’s such a joy and relief to see that there are still a few dedicated souls out there, who create, not with the purpose to make money, but with a pure and honest ambition to share a creative vision, to give us a soulful experience in between art, happening and fashion. Josefin Johansson, designer and stylist for Surferosa and Daniel Sørensen, both fashion designer and light designer and the winner of Project Runway, in a collaboration with AV designer Richardo del Pozo, gave us the most mind-blowing performance last night at Dansens Hus. I don’t think anyone in the audience expected to see a traditional fashion show… we all know that Josefin and Daniel are far from conventional fashion designers, but still, the fantastic, short and intense performance they gave us completely blew our heads off!

Three naked models entered a huge black stage and positioned themselves in the spotlight. Then the show started. Their naked bodies were transformed from blanc canvases into art objects in a spectacular show of light, patterns and colors. It was so clean and simple and still one of the most powerful presentations I have ever seen. We were not allowed to take pictures with flash, because that would have ruined the show, but for those of you who wants to experience a little moment of magic, take a look at YOU TUBE:

For the show Ricardo controlled video using Jamoma and his Jamoma adaptation of Video Projection Tool. More pictures can be found here.