The RESONANCE project is an European collaboration of three co-organisers and four associated partners with a focus on the production, the presentation, the documentation and exchange of experience in the field of contemporary sound art.

Through a series of residencies RESONANCE will give a number of sound artists opportunities to produce and show new work in an European context.

RESONANCE is coordinated by Stichting Intro/In Situ in Maastricht (the Netherlands). Co-organizers are Festival van Vlaanderen in Kortrijk (Belgium), and Singuhr Hörgalerie in Berlin (Germany).

Soundwalkers is a film by Raquel Castro:

“There are some fundamental principles regarding the construction of an acoustically healthy society, one where we can exist within the sounds of life. Respect towards voice and words, sonic awareness, the awakening of the sense of hearing. To preserve the sounds that tend to fade out, while remaining open to the sounds that spring out of each technological stride. To build an aural idiom that interprets its own symbolism. To accept the silence, enforcing it in the due moments. And, above all else, to listen” 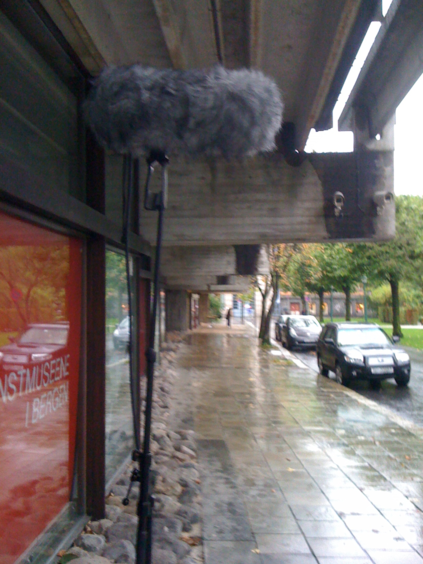 At BEK we recently acquired a SoundField SPS2000 ambisonics microphone and a Tascam DR680 portable hard disk recorder. Over the last two weeks I have been out doing a number of field recordings for an upcoming installation (more info coming soon), and I am currently figuring out how to transform the recordings into 4-channel B-format files for further processing in Max. This is as much a note to myself for future reference as anything else.

The first task is to merge the four mono channel sound files into a 4-channel file. This will be an A-format file, containing the raw signals from the four capsuels of the SPS200 microphone.

I am using Mac OSX, and for this part I will be using Amadeus Pro. At 40 US$ it’s an affordable program. There would probably be heaps of other ways of doing this as well.

On the Tascam I have been recording to four mono channels. First I need to open all of them: 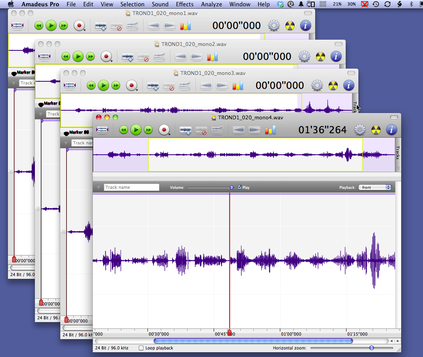 Next step is to create a new sound (File &gt; New sound), and add three additional channels to it.

Ensure that sample rate and bit depth is set to the same as the Tascam recordings! 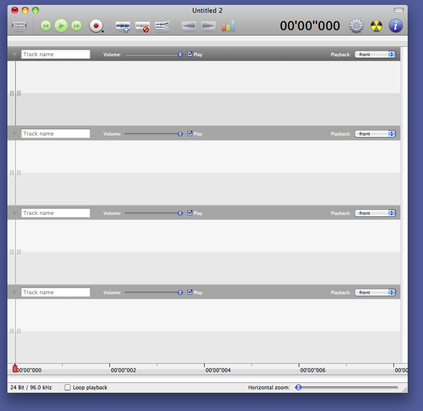 Now I select one mono file at a time, select all and copy. Next I go to the new sound, select the appropriate channel and paste. When done I save as an AIFF file. I get a warning that information might be lost, but that’s OK. 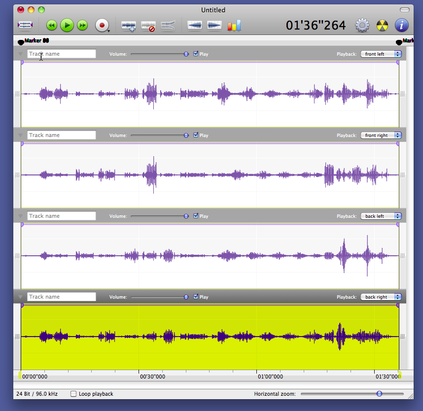 I wrote this tutorials a few days after having figured out how to do it, and had forgotten some details in the meantime. Logic and the Logic project shoudl not be set to 4-channel LCRS or Quadrophonics. The SoundField AudioUnit will refuse to load with these settings, as it requires 6 channels out. Instead ITU 5.1 should be used. This will give you a 6-channel audio file after the bounce. Two of the channels will be silent, and will need to be removed using e.g. Amadeus Pro.

However, since then I have found that it is easier and faster to do the conversion in Wave Editor instead of Logic Pro. The details of how to do this are explained in a more recent blog post.

So, here is the second half of this tutorial/note to self. I had a really hard time figuring out how to do this and rather would not like to start from scratch next time.

The problem is caused by Logic, as most other DAWs, being geared towards standard consumer formats such as stereo or ITU 5.1. The closest it gets to 4-channel B-format is the 4-channel Logic LCRS setup and Quadrophonic setups, but both of these cause problems with the SPS200 AudioUnit plug-in as it is 6 channels in and 6 channels out. Hence it won’t load in a 4-channel strip.

I did try loading the A-format recordings and the plugin in a 6 channel surround strip, but returned channels from the plug-in just didn’t make any sense.

The workaround is to load Plogue Bidule as a plug-in, and then load the SoundField plugin inside Bidule. 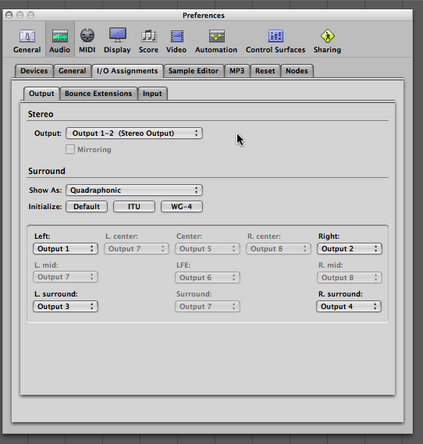 Next we go to File > Project Settings > Audio and set Surround Format to Quadrophonic in much the same way.

I’ve had great difficulties loading the SPS200 AudioUnit plug-in due to the fact that it is 6 channels in and out. The VST version is 4 in and 8 out, but Logic don’t support VST at all. So, the workaround is to launch Bidule as an insert effect at the channel strip. It will show up as 4-in and 4-out. 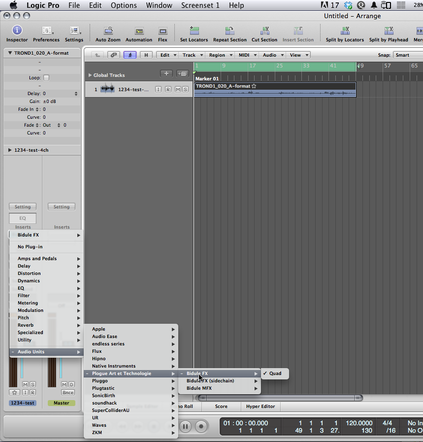 Now add the SPS200 AudioUnit and patch as follows: 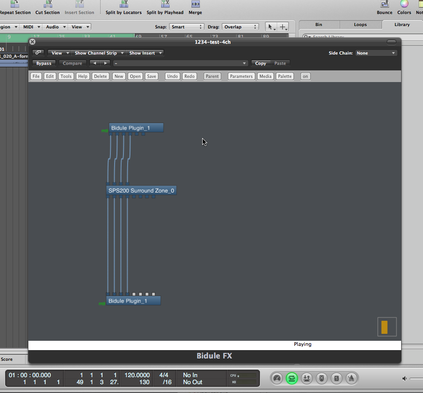 Next double click the SPS200 bidule to bring up the user interface for the plugin. Set output format to B-format, and set “Invert” and “End Fire” according to the positioning of the mic during recording. Please refer to the manual for the mic for further details: 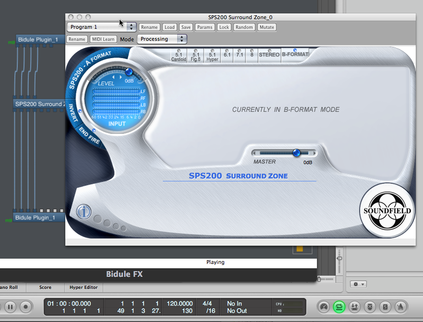 Finally, we are ready to import A-format recordings into the channel strip and start converting to B-format.

Asbjørn Flø has recently uploaded video documentation of several of his works to YouTube, including three that I contributed to: Norway Remixed (2002), Erotogod (2001-03) and SoundTracks (2004).

In a few weeks Asbjørn will be visiting Bergen and BEK to work on a commission for a new composition, and we will spend time looking into spatialisation stuff again. I am looking forward to that!

Wrapping up this series of posts on A- and B-format ambisonics recordings, I just want to add that Bruce Wiggins have posted several useful video tutorials on how to do the same on Windows, using Reaper and the WigWare VST plugins.

The video tutorials are available here.

I tried going down this route on Mac, but unfortunately I got a number of crashes when attempting to load the VST plugins in Reaper. I’m not sure if it is due to Reaper or the plugins, but it might be worth investigating further. Reaper has a matrix facility for routing signals from plugins that would have been more than welcome for this task.

Several times over the last few years, me and my students at the Art Academy, or artists at BEK, have needed to set up automated fullscreen video playback from Mac for video screenings and exhibitions. This has often given better quality of the images as compared to DVD. More recently we have also ventured into compressing and authoring for Bluray, but there is still more research and testing to be done before we can consider it “smooth sailing”.

For Mac playback, here’s the general way of doing it:

Next we need to create an AppleScript that will launch and start playback automatically when the computer starts. In order to do so, open Applications > Utilities > AppleScript Editor, and past in the following script:

You will need to adjust this script according to the name and location of the movie file.

In AppleScript Editor choose File > Save as, decide where to save it, and set File Format to Application.

Now you can test it by double-clicking the resulting application and see if it works.

The final step is back in Apple Menu > System Preferences > Accounts again. Select the Screening user, got to Login Items, remove stuff that you don’t want there, and drag the AppleScript application in. Finally check the Hide toggle. Logic Pro keeps playing tricks on me. I though I had ambisonics A- to B-format conversion sorted out, but alas.

Trying to track down what happens (or at least if Logic is playing back 2 or 4 channels) I have just spent half an hour building a plug-in to monitoring 4-channel signals.

Pitty that Pluggo has been discontinued, but there is hope in the future…

A few days ago I posted a two-step tutorial on how to convert ambisonics recordings from A-format to B-format. The second tutorial was posted a few days after I figured it out, and I had already managed to forget some of the details, and got it all wrong.

In the mean time I have hit into further problems in Logic if using a sound card that doesn’t support the sample rate of the original A-format recordings. And, I have figured out that it is much easier and faster to do in Wave Editor. So, here’s a new and improved tutorial.

We start out where tutorial 1 ended: The de-interleaved files have been assembled into one 4-channel A-format sound file. 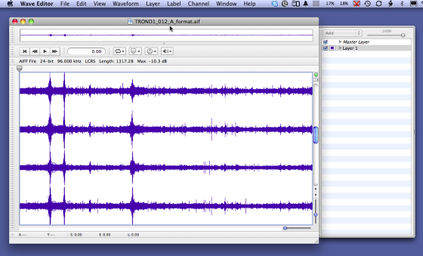 Select the layer in the Layer sidebar, and add the SoundField SPS200 SurroundZone AudioUnit plugin: 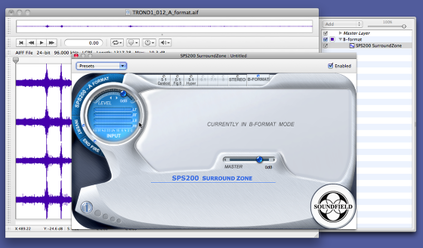 Select the layer in the Layer sidebar, and choose Layers > Flatten Layer from the menu bar. You’ll need to adjust a few settings: 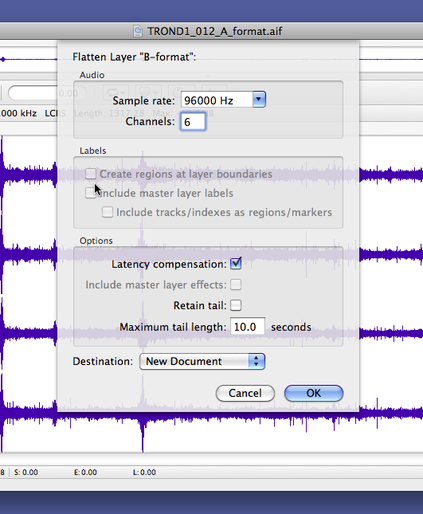 Hit OK and have a coffee while it is rendering.

After a while the new document will open. You’ll see it having 6 channels, but channel 3 and 4 contains nothing but silence. In the screenshot below I have changed the color of the layer to distinguish it from the old document: 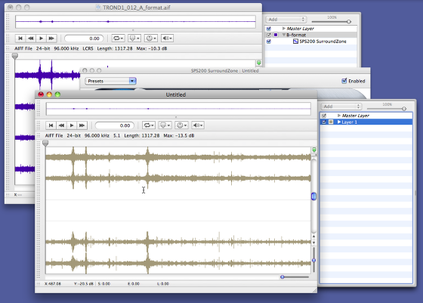 Select all of the silent channels (3 and 4) by double-clicking them, and remove them using Channels > Remove channels from the menu bar: 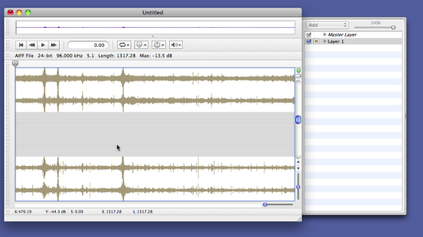 You are left with a 4-channel B-format sound file. Save this wherever you want to, and you are done. 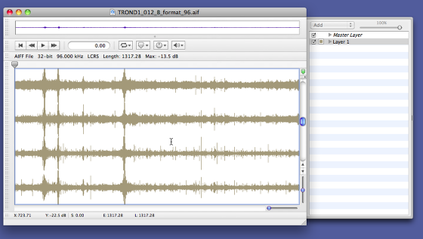 Taking Keynote for a ride

I did a presentation yesterday, and decided to give Keynote a ride, seeing how it behaves as compared to PowerPoint.

I had a few major issues with embedding videos that I’ll either find ways of resolving, or I’ll just dismiss the program as child’s tool.

First of all, when adding several videos in full DV resolution to the presentation, it is absolutely hopeless that they are embedded in the file, rather than being linked to the location of the videos at the disks. I wouldn’t mind this being default behavior as long as it was simple and straight forward to override and rather link.

I have ended up with a file weighting in at 1.11 Gb, while PowerPoint files generally weight in at less than 50 Mb. And the 1.11 Gb size makes absolutely no sense to me, the videos are larger, and I did not embed enough images to warrant this file size.

File saving is slow, as in taking 10 min. How are you supposed to cope with that if preparing a presentation in a hurry?

Finally, I am not impressed with movie playback. I have never had interlace issues using PowerPoint, but in Keynote it was severe.

I’ll see if I can find the time to do more systematic tests sometime in the future, and also check up on the manual. But unless I get this sorted out, it’s back to PowerPoint.

It’s a bit surprising that the office suites available have not made any major inventions in the last 10 years. I was teaching the MS Office Suite back in 1999, and somehow none of the programs seems to have gotten any further since then, they have just gotten cluttered with stuff that’s not all that useful.

What about adopting a Scrivener approache to creative writing, DarkRoom possibilities for focused content development, LaTeX like possibilities for separation of text and typesetting, the Omni way of structuring content, mind maps, scripting of media content, or web 2.0 integration? Or at least being able to properly deal with references…?