Gabriel Dawe was born in Mexico City where he grew up surrounded by the intensity and color of Mexican culture. After working as a graphic designer, he moved to Montreal, Canada in 2000 following a desire to explore foreign land. In search for creative freedom he started experimenting and creating artwork, which eventually led him to explore textiles and embroidery—activities traditionally associated with women and which were forbidden for a boy growing up in Mexico. Because of this, his work is subversive of notions of masculinity and machismo that are so ingrained in his culture. By working with thread and textiles, Dawe’s work has evolved into creating large-scale installations with thread, creating environments that deal with notions of social constructions and their relation to evolutionary theory and the self-organizing force of nature. 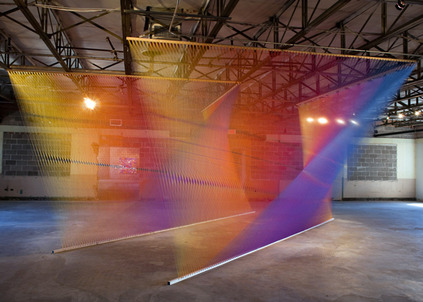 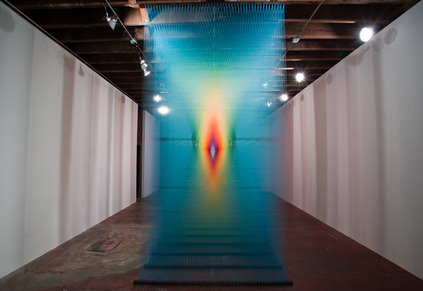 Via My Modern Met

This week we have upgraded the BEK server to Snow leopard Server, with some temporary downtime for this web site as well as my mail in the transition. Everything should be up and running again, and in particular the web service now feels snappier than it used to.

Using latex paint on existing walls and floors, artist Mary Temple gives the illusion of light coming from a window into a room.

In my site-specific installations, light and shadow seem to be cast on walls from nearby windows. However, in actuality, the images are installed in rooms where there is little or no natural light, nor corresponding windows. In this way I’m relying on the viewer to complete the architectural intervention by conceptualizing a window and borrowing from the past experiences with light in space. 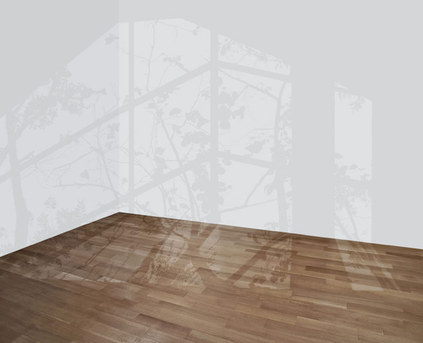 The New Year gets off to a great start with the release of Fripp & Eno’s classic concert at the Olympia, Paris on 28th May 1975.

Writing show notes for the download, Frippertronics expert Al Okada notes “For any fan of No Pussyfooting or Evening Star, this live recording is of epic significance, and…is now also comparable in audio quality, by synchronizing the most complete and best (by a mile) available live bootleg recording with Eno’s stage tapes recently discovered.” Listening to the tapes, Fripp himself observes that “The theme of Blue, the undeveloped KC piece of 1974 & recently referred to by John Wetton, informs the beginning soloing over Swastika Girls.”

The restored concert is available from dgmlive.com in full and as a bonus, comes with the original test loops created for the Fripp and Eno tours.

A More Perfect Union by R. Luke DuBois, currently exhibited at bitforms gallery, looks at American self-identity through the medium of online dating services. Culling data from over twenty online dating sites, the work is organized according to the same heuristics as the U.S. Census, sorting dating profiles by Congressional District and subjecting the imagery and text to statistical analysis.

“Online dating forces us to engage in a vulnerable act of articulating our self-identity in a semi-public forum for the express purpose of being wanted,” says DuBois. “To read a thoughtful dating profile or view a profile photo is to view the precarious expression of someone else’s desires.”

Revealing a ‘dating lexicon’ of each state, DuBois built maps using the words provided by 16.7 million people describing themselves and those they desire. Comprised as a romantic atlas of the United States, each regional geography uses keywords from dating profiles in lieu of the city and town names.

SoundCloud Custom Player is a jQuery plugin for creating easily customizable, HTML/CSS/JS based audio players integrated with SoundCloud. It uses the official SoundCloud Flash widget for the audio streaming and widget API for it’s control or native HTML5 streaming. This way it works on non-flash devices as well, including iPad and iPhone.

If you are subscribing to my RSS and wonder why lots of old blog posts shows up today, I just updated the URL for where to download tl.objects. I should probably fix the Rails code to prevent this from happening in the future.

Adrian Gierakowski has released a set of Jamoma modules for granular sound processing:

The granular suite is a collection of Max/Msp patches for generalised granular sound processing written using FTM/Gabor libraries (developed at IRCAM) and encapsulated as Jamoma modules. Main features include: subsample accurate scheduling, multichannel output, granulation of multiple soundfiles at the same time (with interpolation of two sources per grain), parameter randomisation and sequencing, control via OSC, preset management, preset interpolation. Its modular architecture makes it possible to easily extend it with new algorithms for grain scheduling and parameter control.

Please check out the video below to see the amazing stuff that these modules have to offer:

The ag.granular.suite suite of modules can be downloaded here.