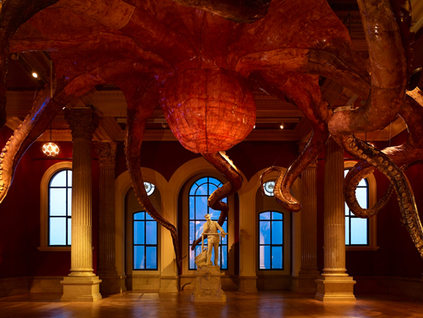 Huang Yong Ping’s commissioned installation for the The Oceanographic Museum in Monaco feels like a meeting up between Louise Bourgeois and Professor Pierre Aronnax. 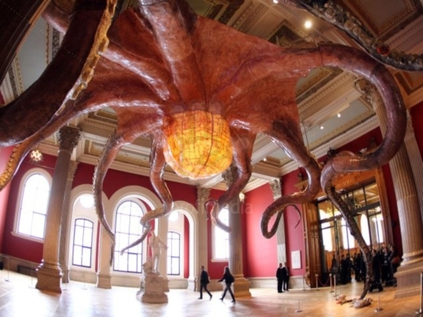 The Oceanographic Museum in Monaco hosts a unique exhibition dedicated to the Mediterranean Sea, bringing together contemporary art and science. The exhibition presents a monumental installation by the celebrated Sino-French artist Huang Yong Ping and features an exceptional collection of maritime objects that illustrate the rich biodiversity of the Sea. The exhibition, which is on view from 20 November 2010 to 20 May 2012, is presented with the Nouveau Musée National de Monaco.
Huang Yong Ping’s 25 metre installation, “Wu Zei”, is a site specific commission for the Museum’s Salon d’honneur and alludes to the 9 metre octopus from the Museum’s collection that is exhibited on the floor above (1st Floor).

“Wu Zei”, a gigantic hybrid animal—an octopus and a cuttlefish—is inspired by the sea and refers to the maritime disasters caused by man. While its head is suspended around the Medusa chandelier, designed by the German biologist, philosopher and free thinker Ernst Haeckel, its tentacles invade the gallery space. One of the tentacles circles around the column, another stretches out towards the first room of the exhibition, and others reach out towards the sea and the statue of Prince Albert I.

So much for fine arts 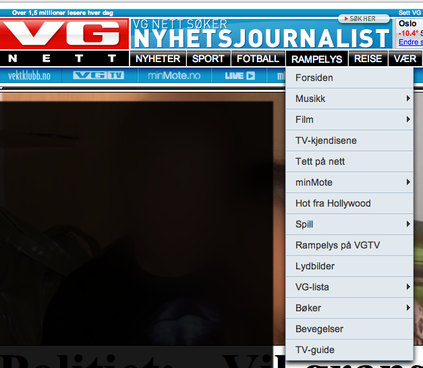 And the notable exception: 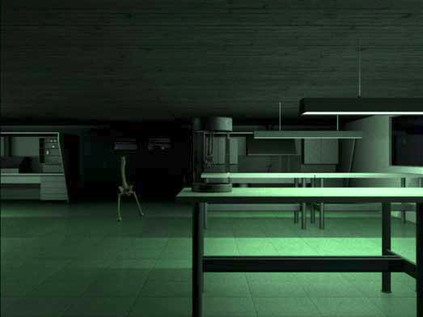 I visited the Absolute Installation exhibition at Museum of Contemporary Art in Oslo today, an exhibition of installations from the museum collection.

Reviews for the exhibition have not be overwhelming, but there are still some interesting works to be seen. In particular I enjoyed the double screen 3D animated video installation anon. by Magnus Wallin. A low resolution version is available at his website. While it to some degree manage to communicate the organic and musical flow of movements in the two videos, the dizzying physical impact of the videos can only be experienced by seeing the installation for real. Anon. will only be screened for parts of the exhibition period. 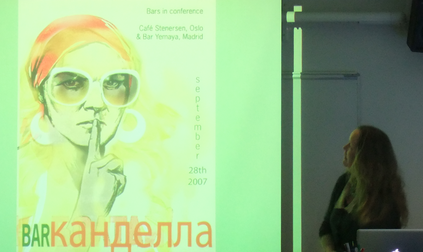 Yesterday and today I have been attending a seminar at Oslo University College. They have taking the initiative to establish a Nordic journal for research on and in the arts. I have been invited to be a member of the editorial board, and the intention of the seminar has been to kick-start work on the journal and discuss the profile. Yesterday I gave a presentation on my own work, concluding by raising a number of issues that I believe will be worthwhile considering in the further process.

This initiative follows on the heels of the newly established Journal for Artistic Research The first issue of JAR seems to be online now, although I haven’t seen it announced yet. Even if there’s a great degree of overlap between the scope of the two journals, I believe that there might be a need for both of them. JAR is highly international in scope, and I expect it to become an attractive channel for publishing, with a relatively high rejection rate. A Nordic journal might have a stronger focus on the artistic research in the Nordic countries, and provide an easier entry level. Also it seems like the Nordic journal might be bridging artistic research, research on arts within the humanities and to some degree pedagogy and didactics.

The Journal for Artistic Research (JAR) is a new international, online, Open Access and peer-reviewed journal for the identification, publication and dissemination of artistic research and its methodologies.

With the aim of displaying and documenting practice in a manner that respects the artist’s modes of presentation, JAR abandons the traditional journal article format and offers its contributors a dynamic online canvas where text can be woven together with image, audio and video material. The result is a journal which provides a unique ‘reading’ experience while fulfilling the expectations of scholarly dissemination.

The inaugural issue of JAR is released on 17 February 2011.

This issue presents work by:

Artistic research is a newly emergent and rapidly evolving field, whose status is still hotly debated. Until now there have only been limited publication channels making it difficult to stay informed about the development of the many topics pertinent to artistic research. JAR aims to provide a focal point that brings together different voices, facilitates discourse and adds to the artistic research community.

Part of JAR’s mission is to re-negotiate art’s relationship to academia and the role and function of research in artistic practice. JAR embraces research practices across disciplines, thereby emphasising the transdisciplinary character of much artistic research.

JAR is guided by an Editorial Board that works with a large panel of international peer reviewers from the field of artistic research. JAR is published by the Society for Artistic Research.

We welcome submissions for future issues through our Research Catalogue, which will be launched in March 2011. 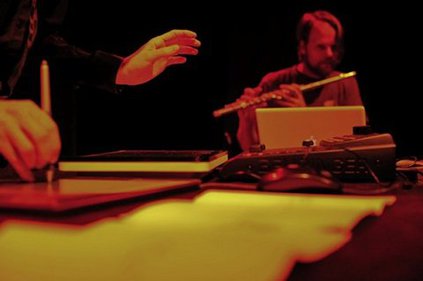 The artists will be presenting questions and problems in and around their 2 year-long artistic research. Unruhige Räume is a work that investigates the transitions between musical gesture, room acoustics and electroacoustic techniques.

You are invited into the work process, to share experiences involving these questions and discuss them with the artists, just before they pack them up. Unruhige Räume will be premiered on March 22nd in Hakonshallen at the Borealis Festival. 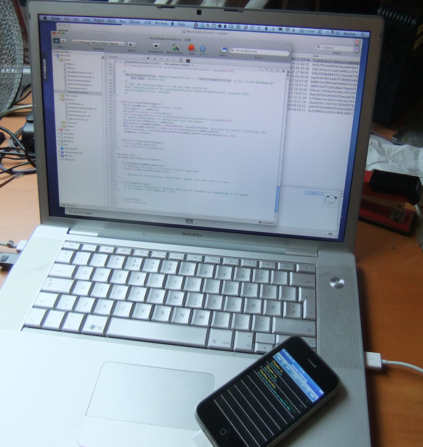 I am currently looking into development for iPhone. Eventually I want to use it for development of portable art-related audio apps as well as multi-touch interfaces for iPad, but that’s still far into the future.

For the time being, I’m making slow progress through the iPhone SDK Development book by Bill Dudney and Chris Adamson.

The first eleven chapters seem to be geared towards a simple database-driven app with table-based interface, the way the Mail app works on the iPhone. From there on it will start getting more fun, dealing with web, network, media, sensors and locational information.

But I guess I’ll have to learn to crawl first. I’m through the first five chapters now.

There’s no such thing as information overload, just filter failure.

His idea of doing 50 pages of research reading and writing 750 words (3 pages) a day is an interesting challenge to contemplate.