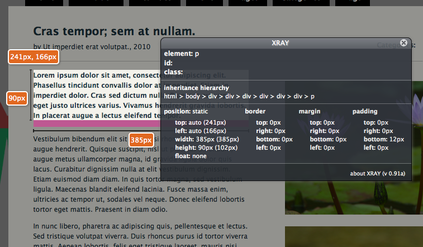 I am currently working on the web site for an upcoming project. It’s difficult to express how impressed I am with Hobo, it is one of the most well-conceived pieces of software that I have dealt with. However, the topic of today’s post is a few new web development tools that I have recently discovered (although the apparently have all been available for a while).

MRI opens a similar floating window and has an input field where you can enter a CSS selector. When you click the MRI button, MRI highlights the elements on the page that are matched by the selector. MRI also works the other way around. Click anywhere on the page and it will suggest CSS selectors for the element you clicked on.

These are both nice additions to the Firebug development tools for Firefox. Another Firefox plugin that comes in handy is the Lorem Ipsum dummy text generator Dummy Lipsum.

On a side note: At more or less the same time that we started developing a new web site for BEK, moving from Zope to Ruby On Rails, the University of Bergen started developing their new web site using Zope. Two years and 15 million kroners later (approx 2.8 mill US$) they are abandoning the system, describing it as a dead end road. Makes me feel that we have at least occasionally made the right choices at BEK… 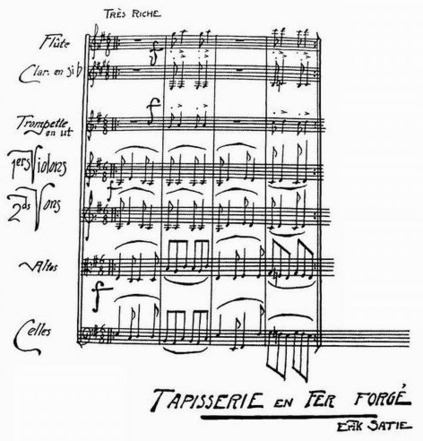 I’ve just finished reading a biography on Erik Satie by Mary E. Davis. I was not previously aware that the initial performance was also arranged in space:

(Musique d’ameublement) promoted a radical concept: as the composer indicated in notes on the (unpublished) score, he intended the work as a ‘furnishing divertissement’: ‘Furnishing music replaces “waltzes” and “operatic fantasias” etc. Don’t be confused! It’s something else!! No more “false music” . . . Furnishing music completes one’s property . . . it’s new; it doesn’t upset customs; it isn’t tiring; it’s French; it won’t wear out; it isn’t boring.’

The inspiration for such an artistic work seems to have come from artist Henri Matisse, who ‘dreamed of an art without any distracting subject matter, which might be compared to a good armchair’. But what it amounts to is background music, or as some have argued, even a progenitor of Muzak – music not to be listened to, music that deflates the very purpose of the expressive medium. Indeed, even more than an exploration of the possible meaning of music, the Musique d’ameublement was an experiment in the potential of spatial music; as Darius Milhaud, who performed the two-piano score with Satie at the premiere, later recalled, ‘In order that the music might seem to come from all sides at once, we posted the clarinets in three different corners of the theatre, the pianist in the fourth, and the trombone in a box on the first floor.’ With forces thus arranged at Paul Poiret’s Galerie Barbazanges, where an exhibition of children’s art was on display, the music was premiered between the acts of a play by Max Jacob, entitled Ruffian toujours, truand jamais. According to Milhaud, Satie invited the audience to ‘walk around, eat and drink’ and shouted at them to ‘Talk, for heaven’s sake! Move around! Don’t listen!’, but all to no avail: ‘they kept quiet. They listened. The whole thing went wrong.’ The performance did, however, earn Satie his first notice in Vogue magazine – in fact, in the very first issue of French Vogue – where the Musique d’ameublement garnered a mention in a column on the latest in home decor:

Furniture music? It is music that must be played between the acts of a theatrical or musical spectacle, and which contributes, like the sets, the curtains or the furniture of the hall in creating an atmosphere. The musical motifs are repeated without stop and it is useless, says Erik Satie, to listen to them: one lives in their ambiance without paying them any attention. It’s up to you to find a way to hear this musique d’ameublement and to devise an opinion on the topic. But that has nothing to do with the furniture we’re so taken with this season. It’s just an opportunity to make and hear music, the passion of the moment.

The writing by Matisse referred to is available here. 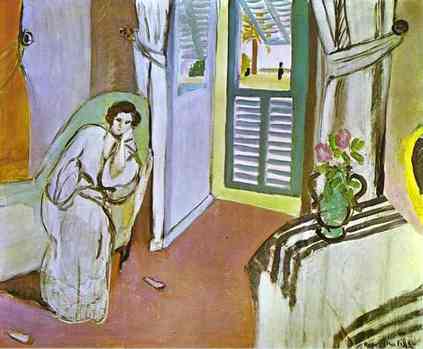 What I dream of is an art of balance, of purity and serenity, devoid of troubling or depressing subject-matter, an art which could be for every mental worker, for the businessman as well as the man of letters, for example, a soothing, calming influence on the mind, something like a good armchair which provides relaxation from physical fatigue.

More music and and more armchairs 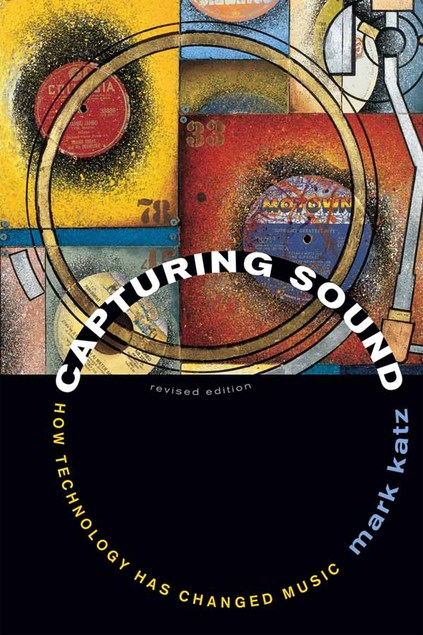 I’m currently reading Capturing Sound. How technology has changed music. by Mark Katz. He lists portability as one of several traits of recorded music, and points towards uses of music that we now take for granted, but that once were novel (pp. 16-17):

Recordings (…) can move easily within our daily lives, detaching music from its traditional times, venues and rituals. While hardly noticeable today, such possibilities were once considered radical. In 1923 British writer Orlo Williams made what would today seem an oddly superfluous argument: that it should be perfectly acceptable to listen to recorded music at any time of the day. He offered a scenario involving a wealthy bachelor, and intercut his description with the imagined resonses of a hidebound reader.

He comes down to breakfast at half-past none: he skims the headlines of his paper over the kidneys and reads the feuilleton over his marmalade. Then, if I am right, he lights a large but mild cigar, sinks into an armchair, and rings for the butler to set the gramophone going. “My dear fellow…” you say in expostulation, “how absurd … how would anybody … I mean … can’t you see?” I apologise. Imagination, yours at any rate, boggles at the thought: yet what I see in alluring clearness, is a gentleman tastefully attired, smoking in an easy but not to soft a chair, while ten o’clock on a sunny morning, he listens to Caruso issuing from a little cuboard in a mahogany cabinet.

Today, of course, the morning listener raises no eyebrows; in fact, listening to the radio or recordings during breakfast is for some as ingrained a habit as breakfasting in silence must have been for people of earlier eras.

The portability of recordings has also allowed listeners to determine not only when and where they hear music, but with whom they listen. Solitary listening, widespread today, has been an important manifestation of this possibility. The practice, however, has not always been common. In the 1923 article just cited, Orlo Williams wondered how one might react upon walking in on a friend who is listening to recorded music … alone. His answer illustrates the puzzlement that may once have met solitary listening.

You would think it odd, would you not (…) as if you had discovered your friend sniffing cocaine, emptying a bottle of whiskey, or plaiting straws in his hair. People, we think, should not do things “to themselves”, however much they may enjoy doing them in company: they may not even talk to themselves without incurring grave suspicion. And I fear that if I were discovered listening to the Fifth Symphony without a chaperon to guarantee my sanity, my friends would fall away with grievous shaking of their heads.

Even if a bit melodramatic, Williams’s remarks remind us that before the advent of recording, listening had always been a communal activity. In prephonographic times it had been for the most part neither practical or possible to hear music alone. Listening was a culturally significant activity, for music accompanied central communal events, including birth or death rites, weddings, and religious festivals. Solitary listening, then, contradicted centuries of tradition.