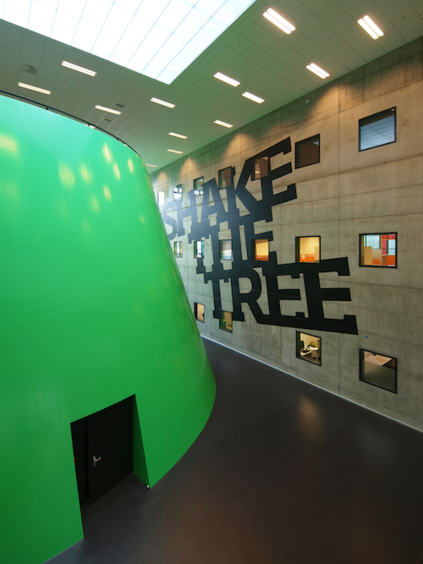 In 2008-2010 I served as artistic consultant alongside Ingrid Berven for a commissioned public art work at Nordahl Grieg Videregående Skole. After a selection process the work SHAKE THE TREE by Maria Udd and Stine Karlsen was selected. I have finally gotten around to add some photos to my web site documenting the work.

As part of the work two quotes by Nordahl Grieg and Mads Gilbert respectively were printed on walls. The quote by Nordahl Grieg, “Hva skal jeg kjempe med, hva er mitt våpen?” was an excerpt from the poem “Til Ungdommen”. This poem again became acutely relevant last year, often used as a hymn in ceremonies and gatherings around Norway following the July 22 terrorist tragedy.

I am currently a guest at the web site of Madstun with the project West coast soundscapes. I will be doing a series of field recordings at various locations in Sotra and Øygarden. The sound recordings will be posted to the Madstun blog with accompanying text and photos.

In August 2009 Jon Balke composer / musician and Tone Myskja video / visual artist moved with their two children to an abandoned farm with 60 acre plot at Fall by Randsfjorden in Søndre land Commune, Oppland. The farm is located on the west facing great views of Randsfjorden and Jotunheimen. The old house is now restored and developed with two units in solid wood. The house has been restored and developed in collaboration with the architect Michael Øvergaard, Norsk Massivtre AS and Energigården at Brandbu.

MADSTUN is a permanent, multidisciplinary production site for art / music / scene / text / idea / environmental technology. Madstun rent room / studio / aterlier to individuals and groups. Madstun is a cross-art venue for developement, inspiration and production. Madstun is an active production site generating projects to contribute to local development and value creation in the community. Madstun has a high profile investment in sustainable energy solutions. They want to develop this abandoned place into a vibrant center for art production, art and creative processes that also include art-theori, philosophy, ecology, ecosophy, and other disciplines.

Learning to crawl in Reaper 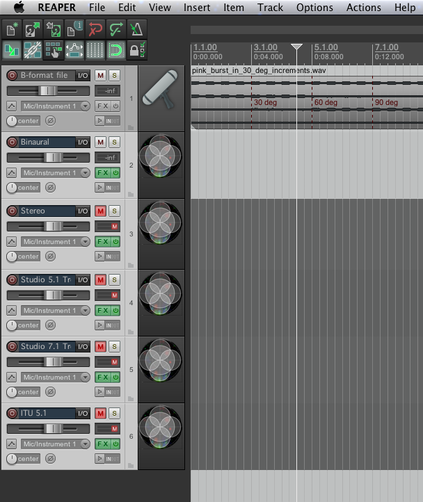 For the last 1 1/2 year I have tried to establish a work flow for surround sound beyond the standard 5.1 and 7.1 formats in DAW programs. It has been a mostly frustrating journey, where I repeatedly bang my head against all kinds of walls. The presentation by Thorolf Thuestad at the BEK Sound and space seminar last fall convinced me that Reaper is the way to go.

This weekend I have set up a track template for decoding of B-format signals, supporting all the decoded channel configurations that I tend to need on an ongoing basis: Binaural, stereo, 5 and 7 channel setups for the idiosyncratic loudspeaker setup at my studio, and standard ITU 5.1. Most parts of it work, although I’m still patting to understand how routing of signals to and plugins work, using the “Plugin Pin Connector” section of the FX Track window. On paper/screen it seems dead easy, but still I don’t manage to get myself, the program, plugins and the sound card to agree on what to do.

In addition it seems like Reaper is currently not able to import markers from AIF files on Mac in the same way as for Wav files. It would be nice to have that working, as the B-format sound files tend to be larger than the WAV file format permits.

Once all of this is fully functional, I hope that it will be much faster to work on field recordings for the Madstun project. And of course, this is an investment in improved workflow in the future when using ambionic recordings.

A stereo version of the sound for the 2011 installation Lines Converging at a Distance at Håkonshallen is featured at the CD MUU FOR EARS 9, published by MUU Artists Association in Finland.

Kaija Saariaho on Composing Using a Computer in the Past

I never like when someone says “I’m using computer because it makes things go quicker.” I don’t like the idea. I don’t think it should go quicker. If for something we must really take much time, it’s for making art.

This is a quick demo of a simple Max patch I’ve made to test the speaker setup for the stage production “Urmakarens Hjarte” by Miriam Prestøy Lie and Torkil Sandsund. The play will be touring Norway later this spring.

Here it’s mainly used to ensure that all channels are working properly and connected to the right speaker, but as I try indicate ate the end by scrolling quickly through channels, I believe that this would be a worthwhile approach to visualize sound levels for metering during performance when using multiple speakers.

If so it would probably be more useful to implement it in Jitter rather than by modifying button attributes, which is what I’m doing at the moment. Also it would be nice to have it developed as a SpatDIF-compliant Jamoma module that could adjust the number of speakers and their positions on the fly in response to the prescribed loudspeaker setup.