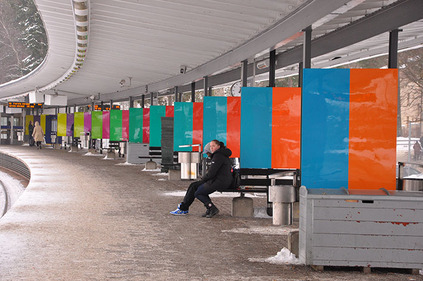 At the end of the month I will be participating in Augmented spatiality, a public sound art project for the suburb of Hökarängen in Stockholm in which the artworks, performances and other comprised events are integrated into the social and spatial processes taking place in the public sphere. I will be doing a temporary sound installation at the metro station in Hökarängen, making use of surround sound played back through multiple speakers distributed throughout the space. For me sound spatialisation (the act of locating sound in space by distributing differentiated audio to multiple speakers) serves a multitude of purposes that includes activating relationships between sound and space, and raising the awareness of and sensitivity to place where the listener is situated. I intend that this sound installation might entice the audience to stay for an extended period of time, contemplating both the work and its site.

In 1980, the geographer and urban planner Edward Soja coined the term Spatiality to refer to the quality of the space that is inherently social. Having other terms in language related to the spatial, Soja invented this one to denote the space that was produced as a result of the social life. He reflected that way on the production and organization of the social space following the previous work on the topic by Henri Lefebvre.

On this basis Augmented Spatiality has been conceived as a public sound art project for the suburb of Hökarängen in Stockholm in which the artworks, performances and other comprised events are integrated into the social and spatial processes taking place in the public sphere. Addressing on the formation of social space in the city, the project aims to reflect on the ways in which public art and sound creation is assimilated or not by the networks operating in a specific place.

Augmented Spatiality has grown as a collaborative framework of artists, citizens, institutions and public structures in order that the project itself and its development may highlight the ongoing cultural, educational, economical and political events in this suburb of Stockholm. Different topics covering critical walks, gentrification processes, the idea of the local and variations in time of the soundscape and the landscape make of the project a ground of experimentation whose results will be experienced mainly through the listening sensitivity in Hökarängen, a suburb whose history and present time have additionally shaped the whole process.

The well-known sociologist Saskia Sassen asked herself: How could public space be created in the city through architecture and the practice of the citizens? The author proposes in her dissertation to work in modest spaces outside the heart of the cities; modest spaces that are open and are still permeable to differential processes of acting in the city development.

Augmented Spatiality takes place in Hökarängen, a district in Farsta borough, in the southern suburbs of Stockholm municipality. The most representative area of Hökarängen was designed in the 50’s by the Swedish architect David Helldén, influenced by new English ideas about neighbourhood units and community centres. The planning of the modern Hökarängen started in 1940 when an urban planning competition was announced, the so-called Gubbängs-investigation whose premise was a testing ground for the society of the future. Part of the planning that came up from these premises was the pedestrian street, Hökarängsplan, which was the first pedestrian street ever planned in Sweden and is one of the main venues for Augmented Spatiality project.

The derivative (touching the curve, sensing the change)

A temporary sound installation at the Hökarängen metro station in Stockholm, using 14 public address loudspeakers mounted evenly along the platform.

The work was part of Augmented spatiality, a public art project for the suburb of Hökarängen in Stockholm in which the artworks, performances and other comprised events were integrated into the social and spatial processes taking place in the public sphere. Augmented spatiality was curated by María Andueza.