The Atmospherics I – The Place Sound Builds In Passing

14 channels of sound and 3 HD video projections. Loudspeakers are arranged around the edges of the gallery space, on the floor and in windows. Sacco bean bags distributed around the space encourage visitors to relax in different parts of the room where they will experience the soundscape in different ways. 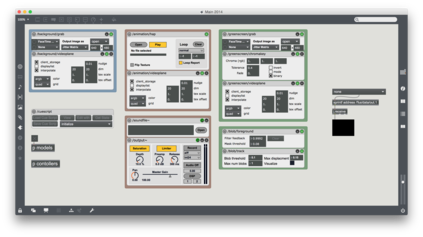 Marieke Verbiesen will soon be installing Moviestar at Norsk filminstitutt in Oslo. Moviestar was first presented at Filmhuis Den Haag in 2009, and has since been presented at Melkweg Mediaroom Amsterdam, Stedelijk Museum s-Hertogenbosch and in Bergen as part of the Meteor festival.

Real-time video processing is done in Max, Jitter and Jamoma, with patchers developed by yours truly. Max, Jitter and Jamoma have all developed substantially since we first did this installation, and for the upcoming installation I’m doing a major overhaul of the patchers. Video processing will now mostly happen at the GPU using OpenGL. This installation will be the first one I’m doing using the recently released new version of Max (Max 7). Additionally I’m moving it from Jamoma 0.5.7 to Jamoma 0.6. Jamoma 0.6 offers true model-view-controller separation.

The new patcher is slowly coming together, and yesterday I let it run overnight. It crashed after a few hours. The crash log indicated that jit.gl.hap might be the culprit. jit.gl.hap enables the use of the HAP codec, That’s kind of unfortunate, as the jit.gl.hap codec is specialised towards efficient real-time playback of videos rendered directly to the graphics card. But if it’s not stable in the long run, it will have to wait. Next step will be to substitute it for the standard jit.movie object, and give the patcher a new nocturnal spin.

Running patches overnight has become a standard part of my workflow when developing larger patches, in order to ensure stability well in advance of the opening. In early projects involving larger Max patches, the patches tended to come together only over the last few days before the opening. That had a tendency of leading to all sorts of unpleasant and stressful surprises. Now I try to grow the patches large as early as possible, and start running them for hours to see how they behave. In this project, with so many technologies involved that I have not used in large-scale projects before, this kind of stress-testing becomes particularly important.