The Atmospherics III – Till it rains, I’m gonna stay inside

16 channels of sound and 5 HD video projections. As in the second installation, loudspeakers are arranged around the edges of the gallery space, on the floor and mounted on the wall just below ceiling height. With a greater ceiling height, and the overall dimensions of the room, this became the most spatialised version of the work so far. 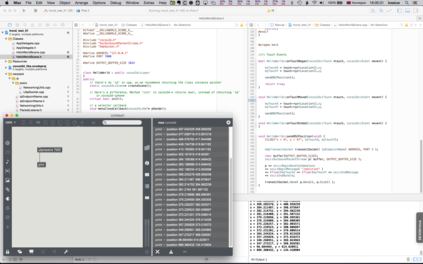 This is probably trivial to more seasoned C++ developers then me, but I just managed to set up OSC communication from an iOS app to Max. The iOS app uses Cocos2D and the oscpack library by Ross Bencina.

This is an important first step towards being able to prototype sound design for an iOS game that Stian Remvik is currently developing.

It also gives me some ideas about the next steps forward in order to be able to use the JamomaCore C++ libraries for DSP processing with OpenFrameworks and iOS apps.