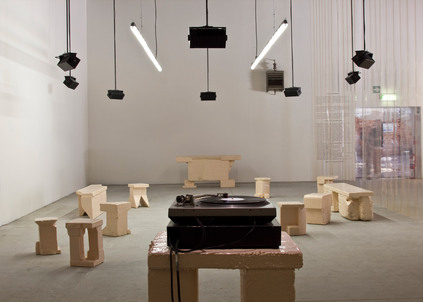 Last week I was in Venice to assist in setting up the Albanian Pavilion for the 2016 Architecture Biennale.

I have left you the mountain presents ten new texts written by contemporary writers and thinkers on the architecture of displacement. These texts have been set to music and sung by some of the last remaining groups of Albanian iso-polyphonic singers, an art form now protected as “intangible cultural heritage” by UNESCO.

The pavilion is curated by Simon Battisti, Leah Whitman-Salkin and Åbäke, and sound design and programming is by Peter Meanwell (artistic director for Borealis) and yours truly.

Performances were captured as 8 channel audio recordings with separate channels for each voice. Using 8 speakers at the pavilion each of the voices is reproduced individually. Playback is controlled by a record player playing MsPinky vinyl records containing timecode information. A Max patch interprets this information in order to control playback of the 8 channel tracks.

I hoped to be able to spend the final days seeing the rest of the biennale and experience Venice in general, but old Mr. Max is a jealous person, and managed to come up with various bugs to keep me occupied. By the end of the stay it seems like we had managed to track them down and make workarounds, and the patch has now been stable for the past three days. Let’s hope that it stays that way.

The pavilion seems to be well received:

The Albanian space is an unexpected delight, a highlight: tiny corner of Arsenale minimally divided with a rubber curtain, and minimally filled with some pink casts, and voices. Ten texts by contemporary authors, about the architecture of displacement – geographical, cultural – are set to music and sung by some of the last Albanian ico-polyphonic singers, a UNESCO-protected intangible cultural heritage. A longing for belonging, for the structures of culture, is beautifully evoked.

Installing in Førde, and a new 4-channel EQ 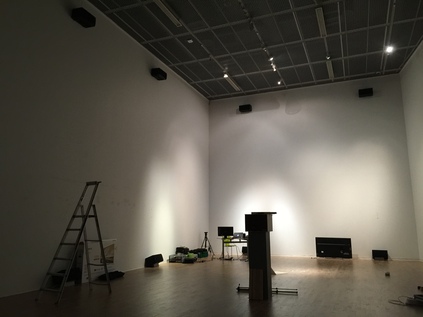 I am currently in Førde with Jeremy Welsh, installing a new version of “Atmospherics” at Sogn og Fjordane Kunstmuseum. We will be using the beautiful “Høgsalen”, and this is the biggest exhibition space that I have ever worked in, 150 m2 with 7 meters to the ceiling. I have installed 20 speakers surrounding the space, 10 near the ceiling, and 10 near the floor. I will be working with 1st and 3rd order ambisonics, and based on initial listening tests I expect to be able to work with the vertical dimension of sound fields to a degree that I have seldom done before.

Initial listening tests also revealed that the space has an acoustic character of its own, with pronounced flutter echoes caused by sound waves ricocheting between the front and back walls. There’s also a pronounced build up of resonances in the deeper mid range, and I’ll need to tune and filter material to the space. In such a large space this is to be expected, and an important part of the development of content on site is the tuning of sound material so that it works well with the acoustics of the space.

Fortunately we have more time for installing than I am used to; close to two weeks. The initial listening tests caused me to kick of a development effort that I have wanted to do for several years: Build a 4-channel equalizer for processing of ambisonic B-format signals. Using the cookdsp library for Reaper JSFX development, this has progressed much faster than expected, and asfter two days I now have a fully working first version of the EQ. 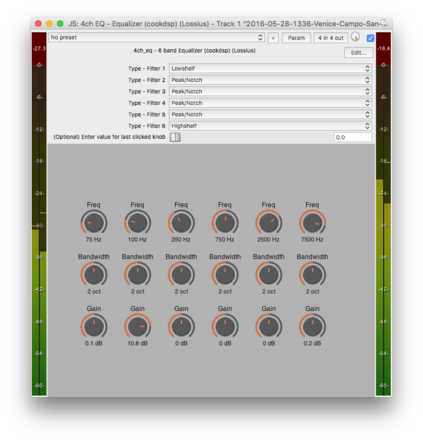 With further use and testing I am sure that the user interface can be improved further, but it will do for now. I expect it to be a huge improvement to the creative workflow in terms of tuning and mixing several layers of simultaneous layers of ambisonic sound material. I also know that this is an investments that will pay dividends for several years to come.

I’ve spent the first part of the day doing some further refinement to the GUI for the 4 channel equalizer developed over the past few days. That turned out to be a good thing, as I discovered several bugs while working on the visualisation.

Now i’m contemplating if all eq curves for Atmospherics should be set up to map mountains, valleys and fiords in Sogn & Fjordane.

I just checked out the ability to embed nested projects in Reaper. The above video explains how this works, and this is a killer feature.

The below screen shot shows what the master Reaper project looked like for the Atmospherics 3 installation at Bomuldsfabrikken in Arendal a year ago. As you can see my approach was to compose a series of sonic scenes. Each scene would last for several minutes, typically 3-7 minutes. Each scene would be developed as a separate Reaper project, and rendered. All scenes were then assembled and sequenced, with appropriate transitions from one scene to the next. 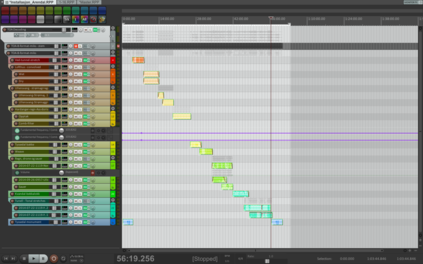 One of the limitations of this workflow was that it was cumbersome to go back into the scene projects from the master project if they needed to be adjusted further. By embedding each scene as a subproject it will be much easier to go back and forth between composing each scene in detail, and working on how it fits into the larger picture.

During the opening of the exhibition Bergen Barokk enters into an improvisational dialogue with the installation. 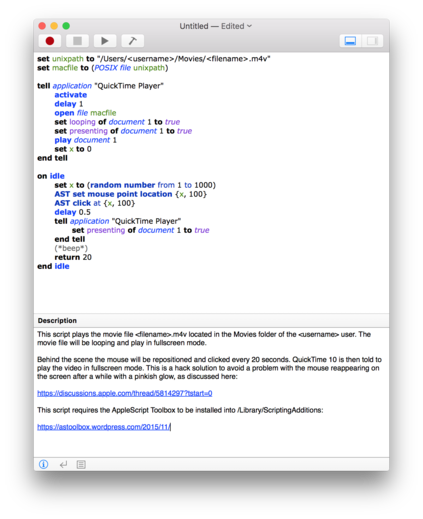 When installing in Førde last week, we experienced a new issue with playback of fullscreen movies from QuickTime. Initially this would work well, but after a while some of the projectors would start displaying the mouse again, with a pink glow. Apparently we are not the only ones to have experienced this.

As pretty as mouse cursors with pink glow might be, they really didn’t belong to this project. Getting rid of them turned into a convoluted AppleScript hack that I’d like to blog, as there’s no way that I’ll remember how we solved this two years from now.

I’ve used AppleScript to control fullscreen playback of movies in the past, but the script just got a whole more convoluted. The trick to solve the issue turned out to require a programatic move and clicking of the mouse every so often, followed by a fullscreen command.

AppleScript does not in itself have any commands to move the mouse, so I first had to install AppleScript Toolbox. This is a a toolbox that extends AppleScript in a number of ways. Once downloaded and unzipped, the file needed to be copied to the /Library/ScriptingAdditions folder.

Next I had to modify my earlier script and add an idle section. The return value makes this execute every 20 seconds.

Finally, when saving, I had to save as an application, and make sure that “Stay open after run handler” is checked, as illustrated below.

The compiled application can be downloaded here. When unzipped, right-click and open in Script Editor in order to modify the username and filename before saving again. You can set this file as a login item, and have the movie play automatically when the computer starts. 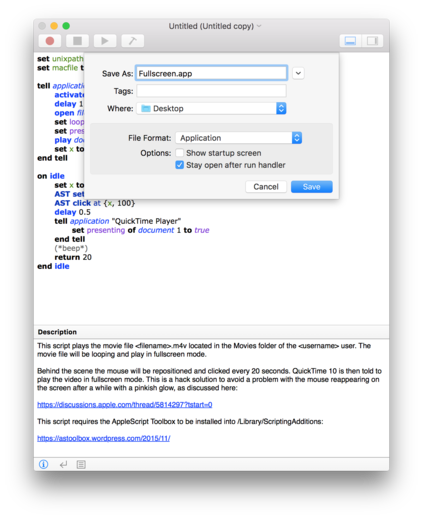 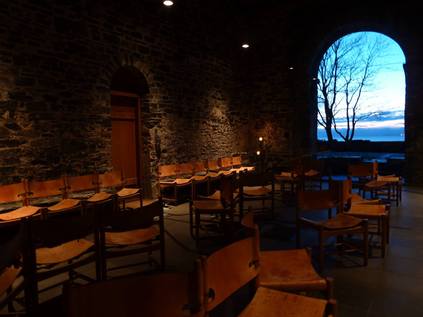 Over the past year I have had the pleasure to serve as assistant supervisor for Line Horneland’s master thesis project “Lyden i mellomrommet” (The sound in-between) at Stord/Haugesund University College. Magne Ingolv Espeland has been the main supervisor.

The master thesis is a critical reflection on various aspects of artistic development relating to the interactive vocal installation “Lyden i mellomrommet”. The installation was open to the public at Sola ruinkirke in January 2016.

The master text (in Norwegian) can be downloaded from the BEK web site, and it will probably be up at Line’s own home site as well as the website of Stord/Haugesund University College soon.