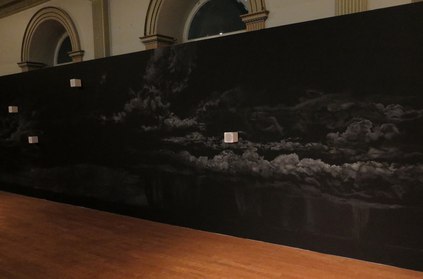 Last week I had the privilege of collaborating with Ingeborg Annie Lindahl for the first time, towards an installation at 3,14. I have followed her work with interest for several years, and when she called me and asked if I wanted to work with her it was a no-brainer. She has done a number of impressive large scale chalk drawings in recent years, and the one at 3,14 is 32 meters long (60 square meters). It has been fantastic to see her working at such a large scale ovr five days only up towards the opening. We immediately managed to established a dialogue on what we do and how each of us work and think, and how this might come together. For me it has been interesting to combine sound with drawings. In most of my projects, e.g. when working with Jeremy Welsh, moving images (video) is an important part of the installation. When combining sound with drawings it became clear that I had to work on an even more extended time scale than I use to in order for sound and visuals to come together while avoiding that sound would be to active, hectic and dominating. This project has also confirmed for me, again, the many similarities in terms of thinking of composition, distribution and scale between sound (evolving in time) and visuals (evolving in space). These are some of the aspects of cross-disciplinary and collaborative art practises that I cherish. Apart from being important in order for me to do my own work within the collaborations, I get an extremely privileged insight into the practise and thinking of the artists I work with. After having working with Ingeborg for a week, clouds look different.

The exhibition is a collaboration between Ingeborg Annie Lindahl and Trond Lossius. It combines a 32 meter mural chalk drawing and 12 channel surround sound into an immersive installation. Drawings and sound are developed on site over five hectic days in front of the opening. Lindahls chalk-drawing will continue to evolve throughout the exhibition period, and as the exhibition period comes to an end, the drawing end in destruction.

This collaborative project investigate possibilities for a cross-disciplinary audio-visual dialogue between large scale drawings and sound. On a conceptual level the installation reflects on the changing climate reality.

Ingeborg Annie Lindahl is an interdisciplinary artist and curator living in Harstad, Norway. Lindahl is educated from Tromsø Academy of Contemporary art and Bergen National Academy of the Arts. She was the winner of VossaJazz-grant with a solo exhibition and received the Per Spilling prize, both in 2013. This year Lindahl was the main exhibitor at ILIOS festival. Her work is widely exhibited nationally and abroad, among others by HardingarT, Trafo Kunsthall, Salihara Gallery Jakarta, Bergen Kunsthall, Den frie udstilling Copenhagen, Galleri Box, Vilnius Titanikas exhibition space, Ariblå Sortland Kunstforening, Bodø Kunstforening, Verk Hammerfest and Tromsø Kunstforening.

Lindahl’s artistic method combines the outcome from field trips and personal experience of the place.When Lindahl started working with chalk, she was drawn by impermanence and thoughts for expulsion.She has used chalk in several different shapes; as marble, plaster and pigment, playing with the idea of mankind as a early stage of becoming mineral. Her material substantiates a manifestation of change, both in how knowledge is made and how nature is in a constant state of transformation. Lindahl is interested in the landscape of echoes in the sphere of human thought, and explore culture and value in our time in relation to nature.
[ http://ingeborgannie.com/] 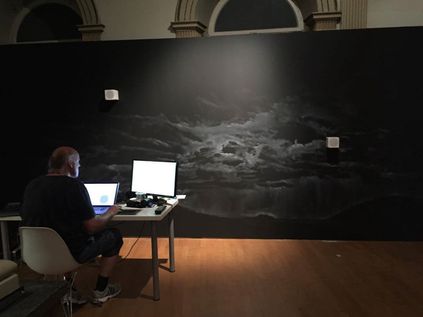 Trond Lossius is a sound and installation artist living in Bergen, Norway. His projects investigate sound, place and space, using sound spatialisation and multichannel audio as an invisible and temporal sculptural medium in works engaging with the site. He often collaborates with other artists on cross-disciplinary projects, in particular sound installations and works for stage. In collaboration with Jon Arne Mogstad and Jeremy Welsh, he has done a series of installations combining paintings, video, prints, and sound. He has contributed to several productions with the contemporary performance group Verdensteatret, winner of New York Dance and Performance Awards a.k.a. The Bessies 2005-2006 in the Installation & New Media category.

He holds a master degree in geophysics, studied music at The Grieg Academy, and has been a research fellow in the arts at Bergen National Academy of the Arts. He is research and development coordinator at BEK – Bergen Center for Electronic Arts, and contributes to development of software for audio and media processing. He was Norwegian delegate to the European COST action on sonic interaction design 2008-2011. 2012-2013 he was engaged as full professor at Bergen Academy of Art and Design coordinating the artistic research project Re:place.
[ http://trondlossius.no/]

1-1 are short interceptions in the exhibition program at 3,14, establishing a dialogue between two artists, with at least one of them being based in Bergen. The 2016 edition of Bergen Assembly offers three distinct propositions by artistic directors Tarek Atoui, freethought and PRAXES. The September programme of events launches with an opening weekend (September 1–4) of exhibition openings, screenings and performances, as well as freethought’s Infrastructure Summit.​

For the opening weekend of the September programme, freethought present The Infrastructure Summit, a two-day discursive event complemented by food, film, performance and music with renowned writers, curators and artists investigating the nature of infrastructure in times of economic disparity, ecological catastrophe, expulsion and forced migration. The Summit runs concurrently with other projects, screenings and installations, as well as the ongoing events programme at The Partisan Café.

PRAXES
Within Bergen Assembly 2016, PRAXES is episodically inhabiting different venues around Bergen with a year-long programme centering on the unassociated artistic practices of Lynda Benglis and Marvin Gaye Chetwynd. Running from February to December 2016, this experiment is the second chapter of PRAXES, co-founded in 2013 by Rhea Dall and Kristine Siegel in Berlin.

The second part of a new commission, Marvin Gaye Chetwynd’s The Cell Group (Episode Two) on September 2–3 is a live act in a former bomb shelter, thriving on telepathic conversations for a paranoid age, while the exhibition Cocaine & Caviar at Kunstgarasjen speculates on long-term connections in Chetwynd’s film work and performance-related objects. Additionally, an ever-larger number of the artist’s Bat Opera paintings accumulate in Bergen City Hall.

Tarek Atoui
The musician and sound artist develops WITHIN, a project initiated in 2008, drawing on conversations with teachers and students from the Al Amal School for Deaf Students in Sharjah City and in collaboration with Paris-based curators Grégory Castéra and Sandra Terdjman (Council).

In a series of public rehearsals, performances and sonic experiments, composers and musicians will activate new musical instruments. Councils’ exhibition Infinite Ear expands on the project’s years of research into the transformations of hearing and how deafness can influence and expand the way we understand sound performance, its space and instrumentation.

Spanish translation of paper on ATK for Reaper Two years ago me and Joseph Anderson presented a paper on the Ambisonic Toolkit plugins for Reaper at the joint ICMC/SMC 2014 conference. An updated version of the paper, translated to Spanish by Lucas Samaruga, has now been published in the latest edition of the Ideas Sónicas / Sonic Ideas journal (Vol. 8 no. 16), published by CMMAS – Centro Mexicano para la Música y Artes Sonoras.

Ideas Sónicas is available in print and can also be accessed for free online. You are required to register with an account, and once that is done, the Spanish version of the paper can be accessed here. Thanks Oscar Pablo Di Liscia of CMMAS for this imitative! 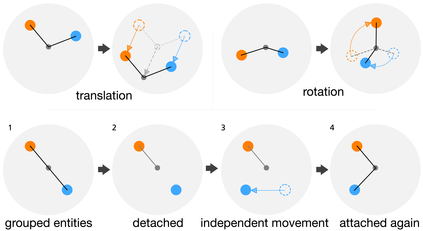 I have also been contributing to the ongoing SMC Summer School for PhD students. Last Friday I offered some perspective Current issues in multimedia performance, and Sunday I gave a lecture on Ambisonics and SpatDIF.