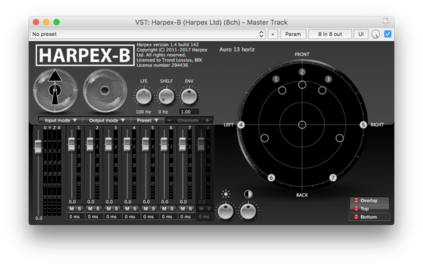 Svein Berge delivers the first software goodie of the year, an update to the Harpex plugin. The new version adds support for custom HRTF sets in SOFA format, and supports AmbiX audio. Additionally, speaker configurations have been extended to support IMAX, Dolby Atmos, Auro 3D and 22.0.

Last week me and Jeremy Welsh visited Kjell-Erik Ruud in Utne in order to set up a new (the 6th!) version of Atmospherics at HardingarT.

Utne and HardingarT is a beautiful and quiet place in the Hardanger fiord. We had lovely winter weather for most of the week, and both of us did new recordings that made it into the work.

Documentation of the installation is forthcoming.

Tom Watts just sent me this video presenting the SOUNDOME that I visited in December.