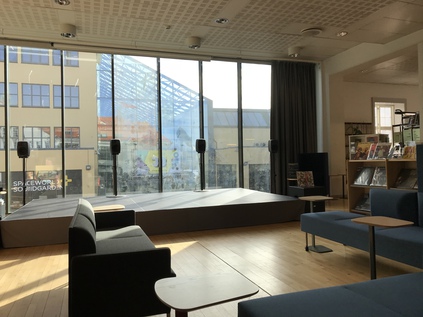 I have a sound installation at the music department of the Bergen Library this week as part of the Borealis Festival. This installationb was first presented last spring as part of the Gjenlyd festival. It has been adapted to this space, and runs from today through Sunday. The installation is dedicated to the memory of Morten Eide Pedersen.

Unpacking an archive, evoking memory and loss, re-animating musical fragments; sound and installation artist Trond Lossius’ Å holde øyeblikket is a moving exploration of the archive and music of the late composer and educator Morten Eide Pedersen. Based on Pedersen’s compositions, and extracts, fragments and material further processed by Trond, the installation is a series of episodes each representing a state, a situation, a material or a picture, as a series of tones. Common to each sonic moment is that it is stretched and held tight before it slips away. As a close friend of Morten Eide Pedersen, Lossius has not only evoked his musical legacy, but his impact as a human being. Eide Pedersen encouraged those around him to hold on to the moment, not only in music but also as a presence in the world and in association with others. Å holde øyeblikket was first commissioned and presented by Borealis in 2017 as part of the minifestivalen GJENLYD.

Supported by Arts Council Norway and City of Bergen.