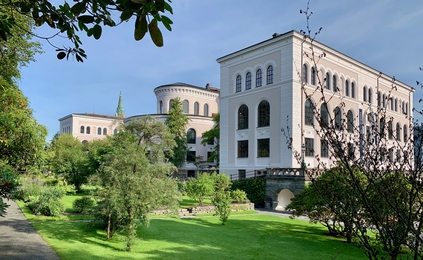 The Nature Historic Museum in Bergen is the first and oldest building of the University of Bergen. It is a landmark in the city and is itself preserved as a historic building. This includes several of the exhibitions, not least the majestic Whale Hall. Several smaller and eleven large whale skeletons are mounted in the ceiling, including a 24 meter blue whale.

The museum is currently closed and undergoing restorations. Bjarne Kvinnsland, David Rothenberg and myself have been invited to work on a super-exciting project. A 24 channel sound installation will be part of the permanent exhibition in the Whale Hall. The speakers are custom built at SEAS in Moss to fit the historic building. The development has required close dialogue with the Directorate for Cultural Heritage.

Bjarne, David and me are responsible for the sound design, and our work has been ongoing for more than a year. It draws on Davids vast knowledge of whale song and communication and his massive collection of whale recordings. Many recordings are his own. Others originate from researchers and nature preservists from around the globe. In addition David and Bjarne have been on several expeditions to record more material.

We all share responsibility for composition and sound design. I have the main responsibility for programming and spatialisation. The speaker layout defies the standard sweet-spot approaches. So, last winter I developed an alternative solution, using triangulation. It serves similar needs to the DBAP algorithm, but offers more distinct spatial localisation. That has served us well.

I have thoroughly enjoyed working on this project. It is a privelege to work in such a space. We are not pernitted to share photos until the opening, so this post will have to make do with one from the park. The museum reopens October 14. I can’t wait!

THE ATMOSPHERICS 9 (A Blue Million Miles) 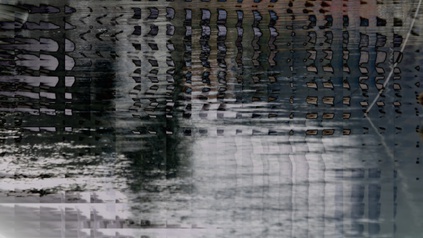 The Atmospherics is one of the ongoing collaborative projects of Trond Lossius and Jeremy Welsh. Through field recordings they capture unique qualities from different natural landscapes and urban areas. The recorded audio and video material is then filtered, edited, modified and mixed to highlight some characters or to mute others. The intention is not to document the sites, but rather to build a database of audiovisual material that is combined in different ways in their installations, where each assembly becomes a “temporary place”, constructed of impulses from different geographical areas.

Since 2014, the project has moved from Bergen, Trondheim, Arendal, Førde, Utne and Campania, Italy, where it has been presented in various installations with multi-screen video and multi-channel audio. An earlier version was presented at Heimdal Kunstforening in 2016, and the last version, #8, was conveyed at Gallery Entrée in Bergen early 2019.

Lossius and Welsh have collaborated in various situations and combinations since 2004. Together with the painter Jon Arne Mogstad, in the group LMW, they produced a series of experimental installations that combined sound, digital images and painting. Lossius and Welsh were also leading the artistic research project “Re: place” at the Bergen Academy of Art and Design in 2012-2013.

The Atmospherics 9 (A Blue Million Miles) is a customised remix from material from the whole project so far, and consist of projected and screened video together with a four channel sound installation.