Symposium on Soundscapes and Immersive Sound

Next week I am looking forward to participate in the 3rd International Conference on Music and Sound Design in Film & New Media.

The symposium will focus on Soundscapes and Immersive Sound, and takes place at Lithuanian Academy of Music and Theatre.

Here is the abstract for my presentation:

Authoring of ambisonics sound fields often seem to be based on a conceptual approach that resembles object-based spatialisation. Object-based spatial scenes in, for instance, Dolby Atmos combine sound sources with meta-information that describe spatial positioning. In the ambisonics authoring workflow, it is common to encode sources (often mono- or stereo-) in a straightforward way that ensures that they arrive from the desired direction. Prime examples of this approach are encoding plugins with graphical user interfaces that display the accompanying 360° video so that the sound designer can glue sound objects onto their visual counterparts.

The Ambisonic Toolkit (ATK) offers a set of tools for working with ambisonics. In addition to a number of encoders and decoders, the ATK offers possibilities for transforming sound fields. The model of the ATK is a sound-field sound-image model rather than a sound-object sound-scene model. In addressing the holistic problem of creatively controlling a complete sound field, ATK allows and encourages the composer to think beyond the placement of sounds in a sound-space and instead attend to the impression and image of a sound field. This is viewed to be the idiomatic approach for working with Ambisonic technique, leveraging the model the technology presents. This presentation moves beyond planewave encoders to illustrate how more complex sound fields and textures can be synthesised, encoded and processed.

Ambisonic encoders and transforms are combined with other common processing techniques such as delay, reverb, distortion, granulation, compression and feedback to create spatial sonic objects that can be described as fields, textures, clouds, dust, fog or shimmer. Most examples are processed in first order using Reaper and ATK, but additional examples illustrate how this can be combined with processing in parallel environments such as Cycling’74 Max and how these techniques can be extended to third order ambisonics.

At the end of the day: A four channel granular delay. Tasty!

Work grant from The Municipality of Bergen 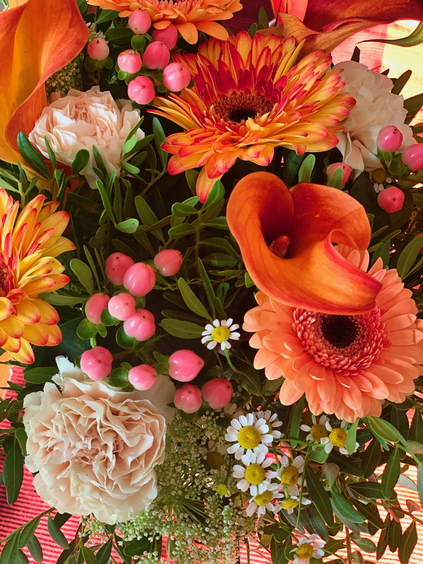 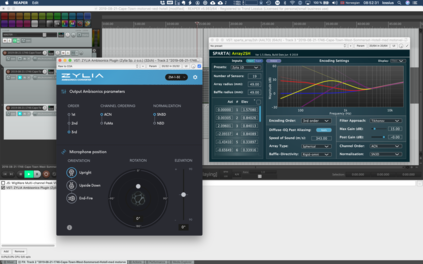 I am listening to some recent field recordings made using the Zylia mic. I first encode them to 3rd order ambisonics and then decode them to binaural (headphones) using the IEM Binaural decoder.

I am shifting back and forth between using the Zylia Ambisonics Plugin and the Sparta Array2SH Plugin for encoding to ambisonics, to compare how they perform. My initial impression is that the Sparta plugin sounds more clean, spatially articulated and open.

The recordings sound pretty amazing at the moment.

One immediate lesson from this is that when I prepare encoded field recordings as part of the post-processing after a field recording excursion, the name of the encoder needs to be part of the filename. This way, if I use the file at a later point, I can review if I need to do the encoding anew. 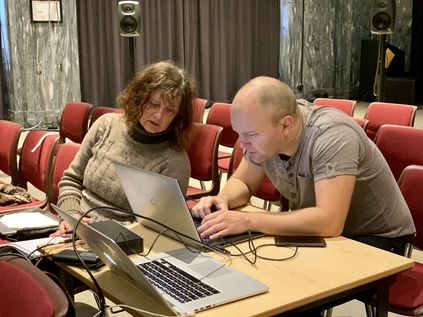 Ewa Jacobsson and Thom Johansen:
Soundcheck for another piece to be premiered tonight.

I have a new work premiering at a concert at Sentralen in Oslo tonight. The work is a commission from NOTAM, and the concert is part of the Ultima Contemporary Music Festival.

A lot of research has gone into the making of this work. It is the first time that I make use of field recordings done using the Zylia microphone that enables recording of third-order ambisonic sound fields. I have also done a lot of research and development into processing and transformations of first- and third-order ambisonic field recordings. Some of this research I presented at the conference in Vilnius last week, and I will also do some demos at the Sonic Wunderkammer workshop tomorrow. The creative process has been an opportunity to revisit thoughts on artistic research and how they relaste to my own practice. Tim Ingold’s book “Making : Anthropology, Archaeology, Art and Architecture” has been a valuable and inspiring conversation partner during the process. Finally comes questions pertaining to the kind of places and soundscapes that I tend to focus on in field recordings; the suburb and the outskirts of urban zones.

From the program notes for the concert:

Trond Lossius is one of Norway’s most prolific sound artists, and in Edgelands he has combined his field recordings of suburbs and city limits, those liminal zones where human activity fades away and nature takes over. An engaging and surprising soundscape merging human infrastructure with the wild.

I would like to thank NOTAM, and in particular former and current artistic directors Notto Thelle and Christian Blom for giving me this opportunity, and Ultima for including it in their festival program. The commission is supported by Arts Council Norway.