Texture I was the first sound installation I made. The idea was to have it present inside one of the buildings at Kolmanskoppe, an abandoned mining town in the Namib dessert. 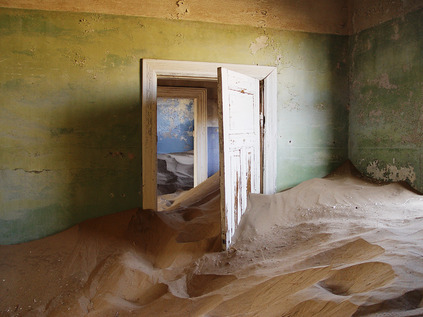 Excerpt from Texture 1 by Trond Lossius

In 1997 my wife got a two year position in Namibia as a replacement scientist for the Ministry of Fisheries. The first year we lived in Luderitz. This was at the end of my composition studies at The Grieg Academy. In order to be able to continue to work, I got a Mac 8600, a Yamaha MU90-R XG MIDI synth, a keyboard controller and some software.

The first month was spent fighting with my modem so that I could get internet connection. In the end we had to take the Mac to Windhoek, a 800 km drive, to get help setting it up. Internet connection was a frail connection using long distance calls, and I got the impression that we were the best customer of Telecom Nambibia in Luderitz. We always got some present when we dropped by to pay the bills.

Watching the time line in Opcode Studio or the eternal staff line in Finale, I got the same mental block that had haunted me before the departure to Namibia; I had no idea about how to approach the line of time waiting to be filled with some kind of content. Max was different, it felt like playing with lego again, constructing something by combining simple building blocks. In addition I found the approach to time to be radically different. Texture I was an algorithmic composition, basicly made up from a number of events taking place at more or less regular intervals. Any tweeking of parameters or introduction of additional processes had instant impact on a global scale. I got into a work flow where I would do some changes to the patches, sit back and listen to the result, do some more changes, and listen again. I imagined that a painter would work in much the same way. 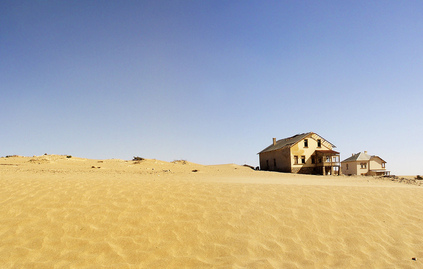 I never had the courage approach Dee Beers to be allowed to work inside the Sperrgebiet, and neither did I know how to protect the equipment from being damaged by the sand.

Although Texture I has never been presented properly as a sound installation, it was presented in a concert version at Det akademiske kvarter in Bergen in 1999 and 2000. Those concerts served to confirm my growing suspicions that the concert situation was not a good context for the presentation of my works.

The work is an algorithmic composition, with MIDI messages generated in real-time using Max controlling a Yamaha MU90-R synth. Each note is made up by combining notes played on four midi channels, with continuous chenges to filters and a number of other parameters. The resulting sounds where then treated with generous doses of reverb and whatever else effects the synth had to offer.

The XG-MIDI-Tools library of patches for communicating XG MIDI messages was to a large degree developed while working on this piece.