An installation by Reinert Mithassel and Trond Lossius.

Two web cams tracks the 3D position of two gold fishes in an aquarium, and use the data to generate sound. When the fishes are in the vicinity of each other, they sing. When they move away, distant bells are heard.

Ekkofisk was made during the Cultural City of Bergen 2000. The Installation is an organic perpetual composer. By the detection of motion of two goldfish, the extracted data is turned into a flowing chain of musical parameters.

The installation was first exhibited at the Bergen Aquarium, and later presented at the Bergen Kunstforening, the 19th World Wide Video Festival in Amsterdam, and the Nordic Interactive Conference 2001 in Copenhagen. 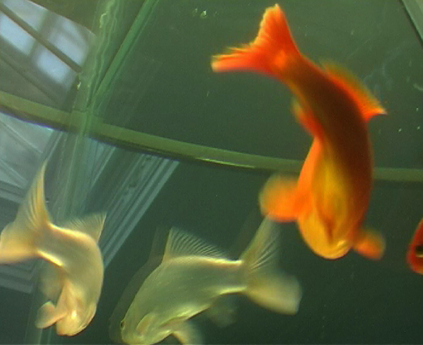 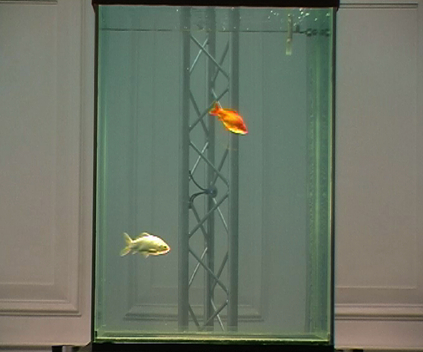 From the catalog of World Wide Video Festival 2001:

‘Ekkofisk’ uses two Apple G4 machines running MAX/Nato to create an organic-digital sound installation in which two goldfish are engaged to collaborate with a computer in order to generate music in real time, simply by doing what comes natural to them: swimming about in the 90 × 120 centimetre tank that has been prepared for their absent-minded recital. Extending from the tank are two triangular-shaped boxes containing video cameras that are pointed at the unsuspecting fish. The cameras register the positions, movements and speed of the fish as well as their changes in direction and distance from each other.

These data are then fed into the computer and translated through an array of mathematical formulas into sound transmitted from four loudspeakers. Within defined but varying degrees the fish control all the factors involved in adjusting the sound: pitch, volume, vibrato, attack and decay. This gives us the sound of an ethereal choir accompanied by occasional bells. As one walks round the tank, the melodic music and the slow movements of the fish create a hypnotic almost otherworldly experience, immersing the viewer/listener in an ambient and serene atmosphere. Here, a fata morgana is created, not by atmospheric conditions, but by digital technology. In ‘Ekkofisk’ this results in a real time bio-digital ‘jam session’.