Monuments and squares are esthetic tools of the past. Set into urban surroundings they structure these areas and express the prevailing ideas of power and culture of the time. The role of the monument in the public sphere has changed. The idea of the figurative and expressive monument has diminished, and public spaces generally have seen a dramatic loss of significance. The panoramic photos of Berlin, Moscow, Bucharest and Montréal address the issues of culture, history, power and society reflected in the interaction of monumental sculpture, architecture, streets and people. 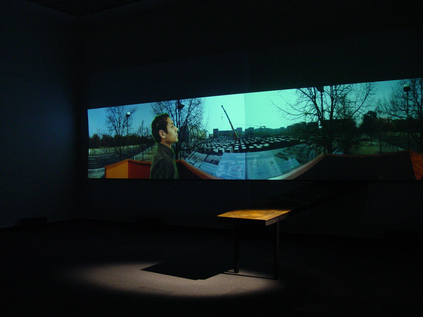 The high resolution wide-screen video projection (2400×407 pixels) is achieved using OpenGL in Max/Jitter. The layers are combined in real time using algorithmic processes, creating rich possibilities for combinations and cross-readings between the various layers in a continuous poetic visual flow.

The sound does not attempt to record or recreate specific spaces referenced in the video. Instead it connects to the idea of spaces, public spaces and people (at one time) present there, and in particular to the void. Multiple speakers are used to extend the installation out into the space. The sound contains subtle circular motions and shifts between scenes in similar ways to the visual material, making audio and visuals parts of a shared flow in time and space.