Lines converging at a distance

The Håkon’s Hall in Bergen is a remarkable building with a long history. The site-specific sound installation is a commission for the 750 year anniversary in 2011. The ambient spatial soundscape invites the audience to experience the hall at a slower pace, and possibly sit down and contemplate the qualities of the combined space and sound. 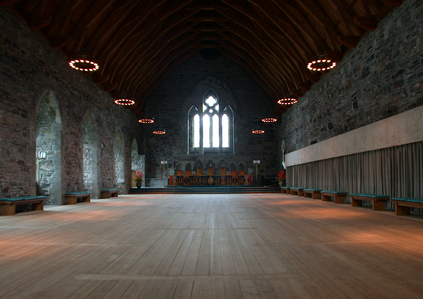 The sound material is based on recordings by the early music ensemble Bergen Barokk, including recordings of the song “Ex te lux oritur o dulcis Scocia”, composed for the wedding of King Eirik Magnusson to Princess Margaret of Skotland, celebrated in the Hall in 1281. This is the earliest preserved manuscript of secular music from Norway. The recordings are further processed and abstracted, and reproduced over a multi-channel loudspeaker system, creating spatial sound qualities engaging with the site and architecture.

The installation was running for five months. Additionally a stereo version was used outdoor on several cultural and festive occasions taking place in the borggård (small square) in front of the building.

Technically the sound for the installation was generated algorithmically on the fly (in real time), using Max and Jamoma running on a Mac mini. Loudspeakers were positioned at the verge between stone walls and ceiling, 6 speakers on each side of the room, leaving an impression of sound drifting through the space up above the heads of the visiters.

The above stereo track was later included on MUU FOR EARS 9, a CD collection of Finnish and Norwegian sound art and experimental music.

The installation is supported by The Municipality of Bergen and BEK.