Sara Rajaei: "The continuous ends connected to the beginnings"

“The continuous ends connected to the beginnings” is a screening of five video works by the artist Sara Rajaei (Iran/Netherland) at Foundation 3.14.

The screening program is curated by Trond Lossius, and co-curated by Malin Barth.

The screening program is presented alongside the installation “Current Disturbance” by Mona Hatoum in the period March 9 – May 6 2012. The five works presented as part of the screening are:

On March 22 an evening program will present three of her works:

In the book “Language of New Media” (2001) Lev Manovich suggested a shift in form from old to new media. While the novel and subsequently cinema privileged the linear narrative, the database has become the predominant organising form within new media. Since this book was published, “archive” has become a more established term than the more technically inclined “database”.

The linear narrative presents events in a fixed sequential cause-and-effect order. In contrast “many new media objects do not tell stories; they don’t have beginning or end; in fact, they don’t have any development, thematically, formally or otherwise which would organise their elements into a sequence. Instead, they are collections of individual items, where every item has the same significance as any other.” These items may be accessed in any arbitrary order.

The works by Sara Rajaei simultaneously seem to draw on both of these organising principles. Her works tell stories, and two of her works, “Shahrzad” (2009) and “A leap year that started on a Friday” (2010) have references to the storyteller Scheherazade, but her stories do not unfold in a linear fashion. Instead past and present seem to co-exist. Collections are important to several of her works; (re)collections of family photos, memories, domestic environments, family and friends, or art works.

Her work draws on photo, film, storytelling and poetry, and the music and sound design, often a contribution of Milan Gataric, is important to the haunting musical timing and flow of the works. The music and the use of narrator(s) place the spectator at a distance to the scenes unfolding. This is enhanced by the camera movements through the scenes.

Her works can be read as four-dimensional sculptures, and the camera is an eye that moves seamlessly through time with the same ease that it moves through space. This poetics of navigation through space is again, according to Manovich, a common quality of new media art, a quality shared with the database. The items of an archive can be accessed in any order, and conceptualised or visualised as being laid out in space, a space that can be traversed in any direction. Within this form narrative and time itself are equated with the movement through 3D space, the progression through rooms, levels, or words.

The archives and databased discussed by Manovich at times seem fragmented, made up of singular items shattered in space. In contrast, in Sara Rajaeis work, stories and archives seem to merge, becoming holistic entities intimately connected to the shaping and defining of the identities and stories of the persons portrayed. 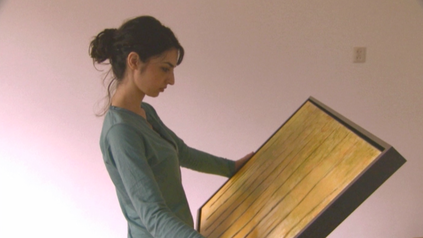 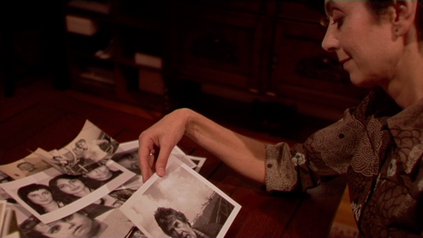 Sara Rajaei was born in Abadan, Iran in 1976. Since 1998, she has been based in The Hague, the Netherlands, where she currently lives and works. Rajaei began her studies at the University of the Arts in Tehran in 1996 and continued studying at the Koninklijke Academie van Beeldende Kunsten, the Hague, from 1998 to 2002 where she specialized in 3D art. She also was a resident artist at Rijksacademie van Beeldende Kunsten, Amsterdam, from 2004. Since 2004, her work, which spans installation, performance, and video art, has been shown in various festivals and exhibitions around the world. She is the winner of the Prix de Rome, basic prixe, in 2009.

In 2007 Sara Rajaei contributed to the screening program At Home in Europe, part of an EU Culture 2000 project in collaboration between ISIS Arts (Newcastle), BEK (Bergen), RIXC (Riga) and Interspace (Sofia).