Pieces of bits while disassembling (for IKEA)

This was a temporary and site-specific installation of sound, light, video and objects by Trond Lossius and Anna Wignell. The project was installed at the old IKEA store in Åsane, Bergen, as part of a one-day five-hours happening produced by the Borealis festival the last day before IKEA moved to new premises.

Modularity is the use of standardised units that can be mixed and matched in a variety of configurations. It is widespread within such disparate fields as technology, programming, arts, design, architecture, and cargo transport. As such modularity is intrinsically linked to processes of standardisation and globalisation. The installation explores the general concept of modularity and in particular conventions and standards relating to interiour design and architecture (such as kitchen standards) that over the years to a large degree have been defined by IKEA. 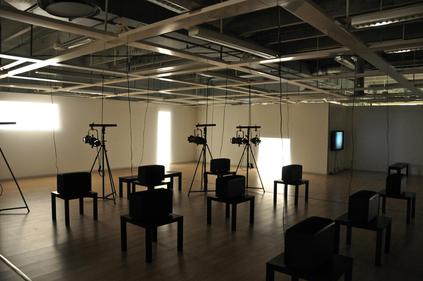 Search-lights are projecting rectangular shapes of light onto the walls. IKEA has over the years played a central role in introducing world wide standards for interiors, based on the Swedish standard for kitchen dimensions. These measurements are based on research into the ideal working process, with the aim of minimising unnecessary movements and strains in the kitchen. Internationally, most kitchens today are based on these principles, first introduced by research in the 1930s. When designing our own kitchen, these are the patterns we choose from. In the installation, IKEA´s standard dimensions are being appropriated and turned into flat surfaces/ “images”. The act of “shedding light on" these dimensions and measurements is an exploration to address issues of inherent power structures in our nearest surroundings, our interior environments.

The sound of the installation contemplates the sound of interior spaces, and is based on recordings from empty rooms. At times quiet noise, known as “room tones”, is all that can be heard, at other times distant traffic from surround streets enters, a refrigerator kicks in, or a fly pass by. Some of the sounds are further processed, and the resulting soundscape drifts from the realistic and documentary towards the abstract. The various layers of sound drifts among 24 loudspeakers mounted in a 4×6 grid on top of IKEA tables. The principle of modularity has been informing the process of sound design throughout – formally with respect to the compositional structure, as well as in the development of the software used for reproducing and distributing the sound to the speakers. The majority of the sound sources originate from sound effects libraries; off-the shelf collections of generic sound recordings intended for use in sound design for film, stage or gaming. 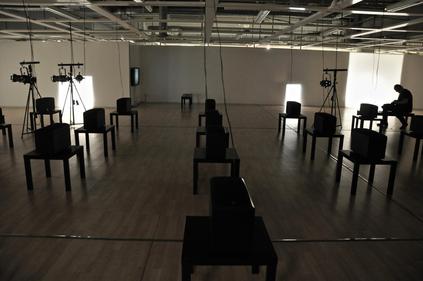 The video piece “Grey limitations” (16 mm film transferred to video, 2012) addresses the white room. The camera pans along walls and corners of the room. The tactile movements can be seen as a continuous search: What is this? What does it mean? What does it do to me? The white space is not only referring to the art context of the white cube. Current ideals regarding interior design have made whiteness a norm for architecture in general and interior spaces in particular. The parallel history is told by the margins of the analogue film. That which is usually hidden in the film projector becomes a visual part of the film. The margins, marked by number, with its perforations, noise and dust, reminds us of the prerequisites of what we are watching: Moving still images, one after another, that creates the illusion of “reality”; the magic of film.

A sequence of words in Swedish displayed one at a time flashes at a screen, as if the words are being pronounced. Headlines of the Swedish IKEA catalogue for 2012 have been decomposed into a list of separate words sorted in alphabetical order. The video is an inventory of the IKEA-catalogue, of marketing rhetorics and of language in general. The text implicitly questions how notions of Swedish culture and identity are being appropriated to become part of the IKEA brand.