During the opening of the exhibition Bergen Barokk enters into an improvisational dialogue with the installation.

The Atmospherics (River Deep, Mountain High) is an ongoing collaborative project by Trond Lossius and Jeremy Welsh, begun in 2014 and continuing through 2017. The project further developed our interest and research into notions of “place”, explored here through field recording in sound and video. The material collected on field trips is processed and edited in order to realise large-scale (and sometimes smaller scale) audio-visual installations in which aspects and elements of different locations are combined to produce a particular temporary place that refers to, but does not literally represent, actual places that have been visited and documented. 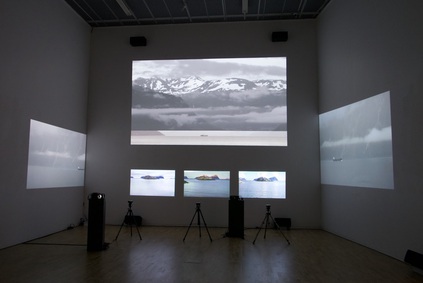 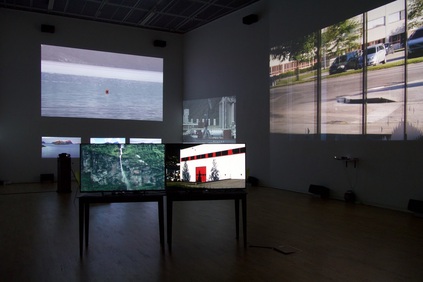 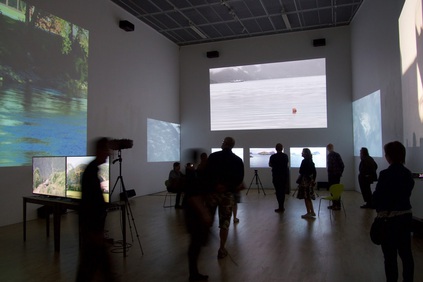 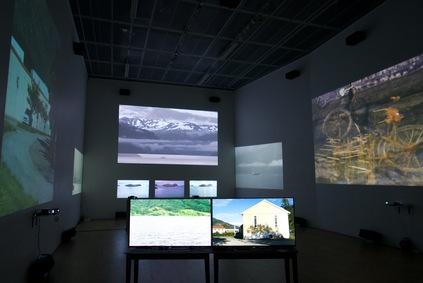 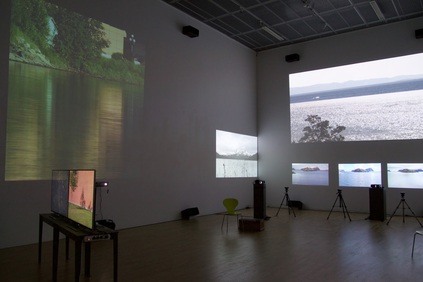 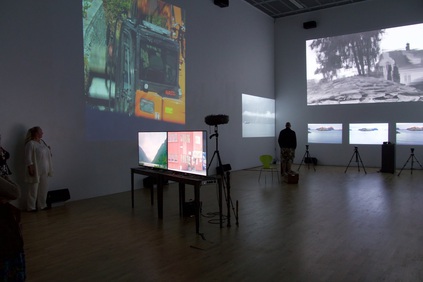 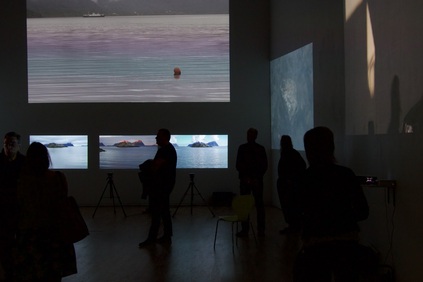 The material collected often exploits contrasts – for example between industrial structures and the natural landscape, between motion and stillness, sound and silence, light and dark, etc. Much of the imagery used so far has come from a West Norwegian landscape that is well known from the work of 19th. century national romantic painters, and a question or challenge in the project has been – how to see these landscapes from a 21st. century perspective? How to capture certain qualities of the visual and auditive identities of these places, and then use these as raw material to compose something new?
Processes of abstraction and filtering allow the material to be transformed. Editing and montage de- and re-contextualise the images and sounds. Multiple viewpoints within an installation, and the use of surround sound enable the construction of an immersive environment that invites the viewer to interact with the material through their own perceptions, memories and emotional responses.

Each installation is developed specifically in response to the exhibition location in which it will be presented, and to that extent, the works have an aspect of site-specificity. The architectural and acoustic qualities of the installation space form the basis for the construction of each iteration of the project, and material to be used is edited, modified and mixed in situ, so that each time the work is exhibited it takes on new aspects.
Furthermore, the video and audio material used in the installation has often (though not always) been related to the broader environment in which the exhibiting venue is situated, so that local references will trigger particular responses in visitors. Conversely, when the work is shown at a location remote from the sources of material, both in terms of distance, cultural references and familiarity, then it takes on other qualities which rely precisely upon the viewer’s lack of familiarity with the material they encounter.

Improvised music performance by Bergen Barokk during the opening of the installation June 18th. 2016.

The Atmospherics grew out of earlier projects that Lossius and Welsh have worked on separately and together. Questions of place, site, space, the mediation of these through audiovisual media, the role of memory in understanding particularities of place and space, have underscored many of the projects they have been engaged in since the early 2000’s. In particular, the art research project Re:Place that was developed in collaboration between Bergen Academy of Art and Design, the Oslo National Academy of the Arts and The Grieg Academy, Bergen, between 2012 – 2013, was a crucial reference point and background to the current project. Many of the core methods used in The Atmospherics were developed and discussed within the framework of Re:Place.

The first work that was completed in the series was a short digital film made as a memorial to former colleague, composer Morten Eide Pedersen (1958 – 2014) who was also a participant and partner in the research project Re:place.